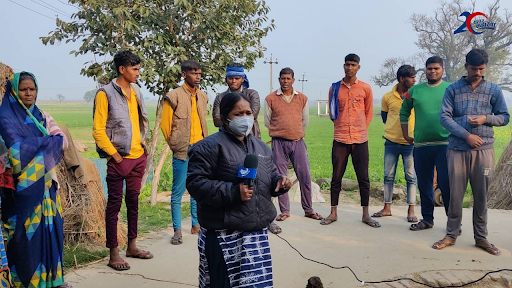 Khabar Lahariya, the country’s only rural, women-led media collective, once the proud publisher of a chain of local language newspapers and now a proud digital-only rural news channel with 554k YouTube subscribers and an average of 10 million views every month, and a team of Dalit-led, but also Muslim, also OBC, also upper-caste women, all showing what a truly diverse media organization can look like – enters its 20th year this year.

It seems significant that this is also the year in which we have been featured in a documentary that has been nominated for an Academy Award. We had a chance to watch the entire film as an organisation recently, and we would like to make our views clear. The film is a moving and powerful document, but its presentation of Khabar Lahariya as an organisation with a particular and consuming focus of reporting on one party and the mobilisation around this, is inaccurate. We recognise the prerogative of independent filmmakers to present the story that they choose to, but we would like to say that this eclipses the kind of work and the kind of local journalism we have done for twenty years, the reason we are different from other mainstream media of our times. It is a story which captures a part of ours, and part stories have a way of distorting the whole sometimes.

In our 20 years of practising independent journalism, it has been a foundational value to be deliberate about how and who we include in the frame or story, about corroboration, about multiple perspectives. These values are not reflected in the version of ourselves we see in the film.

And so, to people all over the world who are watching us, maybe even hero-ing us, we want to say that ours has not just been the easy-to-digest, heartwarming story of the small figure talking back to the big powers in a time of political change. It has not been about sweeping into the rallies and offices of just one particular political party and asking difficult questions. In our two decades, we have had a newsroom with women differing on political opinions and ideologies. In 20 years, we have reported on (and befriended) many parties in Uttar Pradesh that have said they will stand for the rights of the poor, the marginalized, and we have shown them all the mirror when they have not done what they said.

And so what is the whole story?

It has been 20 years of jumping through hoops.

20 years of not knowing what the next year would bring: whether we would shut down and send everybody home because newspapers all over the world were shutting down and sending all their reporters home; or because we were not seen to be viable, or couldn’t show ‘tangible’ impact that a funder could see; or whether we would open new editions, because local news in the local language was a rare and hot commodity, and rural women make such good journalists. 20 years of arguing down resistant family members of our reporters – who couldn’t make up their mind if a paycheck or a hold over ‘their’ women was more important to them.

20 years of forging complex friendships and relationships in the field, in villages, anganwadis, schools, in dingy district press clubs, in administrative blocks – in the panchayat bhavan, in the block office, in the district magistrate’s office; in the Bahujan Samaj Party, the Samajwadi Party, the Bharatiya Janata Party, the Congress, the Peace Party, the Ambedkar Samaj Party, the Bundelkhand Mukti Morcha, the Swatantra Janta Party, the Rashtriya Lok Dal, the Jan Adhikar Party, the Bhim Army; and with all sorts of journalists.

20 years of being charming to officials asking us for bribes to get registrations done, of having tea with police officers we knew were hand in glove with the criminals we were reporting on, of copy-editing politicians’ Independence Day greetings, of sitting through interviews with men with guns (and shifty glances).

20 years of reporting on violence against women, wading through mountains of FIRs, highlighting unreported cases, sitting outside postmortem rooms where families of murdered women put steep prices over dead bodies – in a final act of violence against the dead women and among the most brutal forms of gendered violence. We have reported on violence, not because that is what women reporters do, but because it is political and economic; never revealing the identities of our subjects but we were dismayed to see the identities of rape survivors revealed in the documentary.

20 years of uncovering scams and other shocking news stories – on roads, on development schemes, on electricity, on sanitation. We have reported a lot on sanitation, much more than elections, and when sanitation was not a political story.

For us this – hustling for the small, local, mundane story, amplifying its significance – has been what journalism is. And in our 20 years of doing this unglamorous work, we have not known if we would survive another week, or month, or year. Even as we speak, and as some of our stories reach the glitz of Academy Awards luncheon parties – we feel the same vulnerability.

We have not, as the film would have one believe, been able to carry our caste identities on our sleeves, with bravado and humour. We have had to be discreet, often fearful. And even if we have written and reported from our particular caste identities, we have upheld the right to protect our families’ privacy, especially our children’s, who will come into these battles in their own ways.

We have not emerged from a vacuum, but from long decades of ground work, on empowerment, on literacy, on digital access. We have had to think, not just about our stories, but our homes, our offices, the resources our team members must have in order to do this work, the many kinds of strategy and partnership it requires so that we are able to keep doing this work, and we can enable new generations of new journalists to rise up. When we go away for office offsites – this is mostly what we discuss, not just the way we feel when a particular party wins an election – which is what you’d take away from the film.

In this significant year, as we unexpectedly make ourselves known all over the world, and in our own work we still try to shift the balance of power between the makers and consumers of stories, especially when the subjects are those on the margins, we would like to talk more about what makes women-led, independent rural media possible – which is a much more complex story than the one going to the Oscars.