No Bank, No Vote

There’s a unique reason for a village in Uttar Pradesh choosing not to vote this time: Their local bank, it seems, has disappeared!

Women and men, both young and old, of Gudha village in Mahoba district of Uttar Pradesh’s Bundhelkhand are unanimous in their resolve concerning the upcoming Lok Sabha elections.

They have decided not to cast their votes.

The reasons however do not lie in the usual suspect zone – this intended boycott is not about farm distress, or water shortage, or lack of development and governance, even though all of those would qualify for Bundelkhand at large.

What has tipped the Gudha village residents over is the alleged disappearance of their local bank. Says Budhi bai, a village elder, her voice laced with rage, “Our village bank has been functioning since the last 35 years, with no problem or difficulty. But now it has disappeared. What crimes have we committed, for this to have happened? Our votes will be registered when the bank comes back.” Budhi bai is leading a group of villagers as perturbed as herself, holding banners of protest, all of whom are standing outside the building that used to be the local Allahabad Bank office. 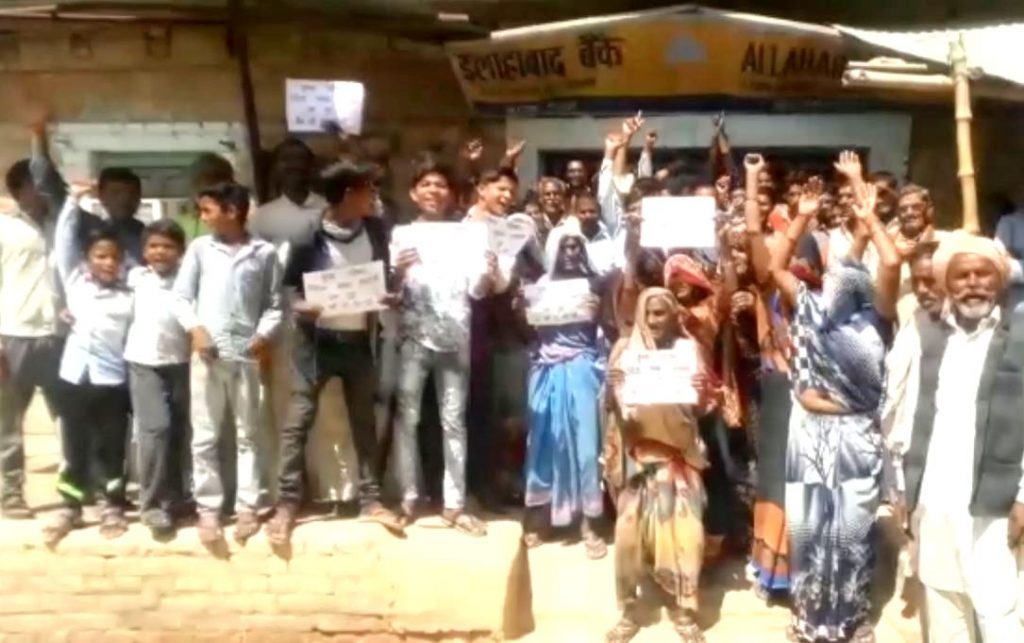 A location shift is what seems to have transpired, but it is a development that has been outside the ambit of the residents’ awareness. With a chunk of the population comprising daily wage labourers, having a bank handy is essential, sometimes the crucial difference between a day that features all square meals. The bank has now moved to Gaurhari, which adds significant travel time for the residents of Gudha.

The sense of betrayal is hence palpable. In the words of Udhav Prasad, “If they had any problem, say a need for a new building, they could’ve discussed it with us first. We are a big village with about 10,000 inhabitants. Nine clusters are governed under our Nyay panchayat. Why has the bank been shifted to Gaurhari village that’s under the jurisdiction of a different nyay panchayat?” Mohan Lal, another resident, seems to have had a consultation with the bank officials before they disappeared, allegedly overnight, “They said there were problems with the office building and we guaranteed to build a new structure within eight days. They had even been allotted land for construction.”

Chingutta estimates foul play in action. According to him, bank deposits would have run up to crores over the decades it has been functional, “The minimum deposits start from Rs 20 and they went up to 500 over the years and everybody in the village has an account in the same bank. So, there must be some other reason.” The jaunt upto the new branch in Gaurhari implies “foregoing a whole day in time, labor and wages”, he further rues.

No officials have yet responded to the complaints of the locals; indeed the only administrative response so far has been the appearance of the local police who came to remove the protest banners.

The BDO (Block Development Officer) Sahadev had a vague response to the questions, “There was an order by a circular requiring them to shift. However we will make sure there is another branch in Gudha again, soon.”

The functioning of the banking system, especially in the context of last-mile connectivity, has been under duress with the implementation of the government’s ambitious Jan Dhan Yojana.  In the four-plus years since 2014, more than 310 million people have been brought into the formal banking system.  According to the official figures, 99% of households in both rural and urban India have at least one member with a bank account due to the scheme launched by Prime Minister Narendra Modi. The push to open bank accounts saw the simultaneous shift of various welfare benefits as well, subsidies and direct benefit transfers linked to bank accounts.

And while these have been touted as big successes of the current BJP government, what has been a mapping – and indeed foresight – failure is the establishment and capacity of physical infrastructure, and how that did not, or could not keep pace with the surge in the number of account holders over the years.

On the ground, this has effectively meant huge inconveniences to the rural population, who have to travel far, wait in long queues and deal with a lack of accountability from already-overworked bank officials. According to the Reserve Bank of India’s Report on Trend and Progress of Banking in India 2017-18, the number of new Scheduled Commercial Banks (SCBs) opened in Tier-6 centers (rural centers with population less than 5000) has dropped from 2429 branches to just 626 in 2014-15 and 2017-18 respectively. Reports have also shown that the nature and frequency of transactions in a rural bank are not enough for its sustenance – dealing with ubiquitous bad loans a constant item on the troubleshooting agenda.

And so it seems that the mystery of the disappearance of the local bank in Gudha village of Mahoba is not a case that is wont to be cracked anytime soon – with the ongoing panchayat-level power tussle with bank officials and block authorities, the people of Gudha will need to conjure up Plan B’s, and fast.