More than Anti-BJP, There is an Anti-Modi Sentiment Here 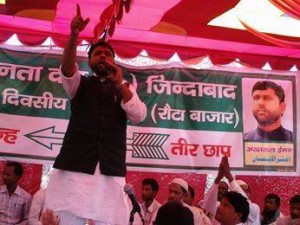 Akhtarul IMan of the JD(U)

Dr. Dilip Jaiswal of the BJP

Kishanganj District, Bihar. Although Bhartiya Janta Party’s workers claim to be riding high on the Modi wave, the same wave has become a problem for the local BJP candidate Dilip Jaiswal in Kishanganj.

Dilip Jaiswal, a local of Kishanganj, has a strongly positive image in the district, yet the fear of voting for him leading to Narendra Modi becoming the Prime Minister is palpable in the Muslim majority in this area. In Kishanganj, 10 lakh of roughly 14 lakh voters, are Muslim. Modi’s communal, anti-Muslim image has put Muslim voters in a dilemma about Jaiswal, now.

On the other hand, in a major setback to Chief Minister Nitish Kumar’s party, Akhtarul Iman quit Kumar’s Janta Dal (United) on 15 April. He had recently joined the JD(U) after having left Lalu Prasad Yadav’s Rashtriya Janta Dal and had been given the Lok Sabha ticket from Kishanganj by the JD(U). Akhtarul withdrew from the election race and clearly stated that with too many Muslim candidates fighting from Kishanganj, the Muslim vote would get divided thereby benefitting the BJP. Akhtarul said his main aim was to defeat Narendra Modi and thus by withdrawing his nomination, he was improving the chances of fellow Muslim candidate from Congress Maulana Asrarul Haq.

Kishanganj, in eastern Bihar, votes on 24 April. The district is rife with trafficking of women and children since it shares borders with Nepal. Lack of education, and unemployment have made poverty levels in the district higher than in the rest of the state.

Once We Have a School, Then We’ll Vote