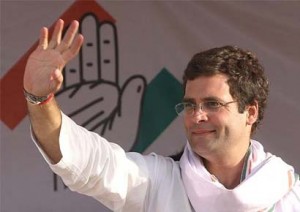 Banda district, Uttar Pradesh. 30 kilometres from Banda town in the Bundelkhand area of uttar Pradesh, Congress Vice President Rahul Gandhi addressed a rally in Atarra. The rally was organized at the Hindu Intercollege here on 16 April.

Rahul Gandhi called to the people of Banda, one of the largest districts in Bundelkhand, to vote for the Congress candidate Vivek Kumar Singh so that Bundelkhand was truly represented at the Centre. Currently, the Member of Parliament from this constituency is Samajwadi Party’s Bal Kumar who is also the son of dreaded deceased dacoit Dadua.

Rahul also made a flurry of promises which included increase in employment opportunities for people in Banda and more facilities for cottage industries to flourish here. Addressing water problems rampant in the region, he also promised drinking water and more schemes for the betterment of farmers here.

Interestingly, Rahul Gandhi had last visited Banda in 2009 when he visited the Nahri village of Naraini block. Back then too, Gandhi had promised to facilitate improvement in the status of farmers and ushering in development for the region. He had also promised to open up a computer laboratory at the Dalit Hostel here. Five years later, there is no such laboratory, and farmers in Bundelkhand are still struggling to make ends meet.

More than Anti-BJP, There is an Anti-Modi Sentiment Here