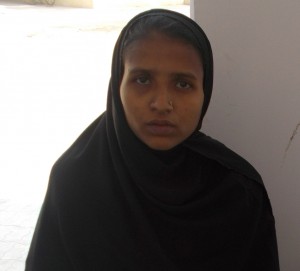 Banda District. Another case of police officials urging a woman to compromise with her husband, has come up in Banda district. In an incident that raises serious questions on the lack of sensitization in police officials, the woman was roughed up and beaten up while she was registering a complaint against the man for violence at a Counseling Centre.

Parveena, a resident of Mahbara village in Banda, was at the office of the Superintendent of Police, submitting a request for an enquiry into the matter. She said, ‘My husband Zaheer would beat me up regularly. Matters got out of hand when he came home drunk and beat me while I was pregnant. On 15 January I went to the Mahila Police Station (Women’s Police Station) in Banda to register a complaint of domestic violence against him. There, police officials urged me to reach a compromise with him and solve the matter without filing a police complaint. It was then that we went to the Counseling Centre on 19 January. There, again, Zaheer got violent and that too in front of the officials.’

After the incident at the Counseling Centre, Parveena decided to file an official complaint against Zaheer and approached the Superintendent of Police. She sought to file a case against Zaheer asking for compensation and child maintenance.

S.P. Piyush Srivastava said that the case had been registered against Zaheer. Meanwhile, Zaheer denied these allegations and said that not only was Parveena lying, she also retaliated with violence during the incident at the Counseling Centre.