Living on a Landfill

Entrenched in muck and grime, in the Prime Minister’s very own district, a basti is inching towards definite doom 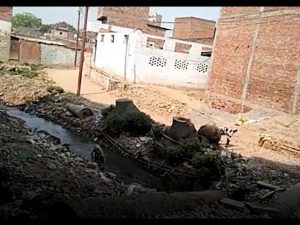 It’s a catchy tune, almost as catchy as the deadline set for a Clean India in the villages. December 2018, a date pushed ahead by over a year already, and if the Saraiyya basti in Benares is any indicator, then the Swachh Bharat Mission Rural chapter’s deadline will probably have to move well into 2019. Except oh wait, that’s election year.

Located on the banks of the Varuna river, a tributary of the Ganga and named after the god of wind, Varuna, is Saraiyya basti, a colony of predominantly Muslim inhabitants, that could pass off for a landfill quite easily. This neighbourhood, with an estimated population of about 10,000, has been doubling up as a dumping ground for the last 10 years, with municipal bodies having assigned it as such. Mumtaz Ahmed, local shopkeeper, tells us of the trucks that line up day after day, dumping giant garbage heaps right outside their homes. As a result, serious epidemics and outbreaks have been a way of life here – from cholera to respiratory problems, and skin rashes and break-outs. A 9-year-old boy from the basti Mohammad Asif points to his face and makes the link almost matter-of-factly, “This is because of the kooda (trash) around. It itches as well.”

Ahmed recounts the measures that the basti dwellers have employed over the years as forms of protest, “Oh, there’ve been chakka jams here so many times! But it has all fallen on deaf ears, the authorities have never lifted even a finger to do something about the situation.” The chakka jams came after two straight years of petitions, we learn. Ahmed adds, “They tell us this is government land, and that we don’t own this space. So, they can do as they please. If it means using it as a garbage dump, so be it… Of course, the government just owns all the property, right?”, he asks, almost an honest question.

As per official protocol, settlements around landfills are meant to be given rehabilitation in safer locales, even as the efforts towards waste disposal and conversion of waste to energy work simultaneously. But in Saraiyya basti, government intervention in the matter has been slim to negligent.

Rajkumar, local paan seller, speaks of a few officials who’ve visited the basti over the past 2 or 3 years – visits that have not been fruitful for them. “They come and do their examinations, and leave. We hear nothing of what gets decided.”

Haji Okaad Ansari, local councillor, is all riled up, “The government speaks of Clean Ganga and look at the reality. All the garbage is being thrown right at the banks of the Ganga and the Varuna.” Ansari gets into the science of the problem, which has caused the several afflictions and diseases that have plagued Saraiyya basti for years, “The gases emanating from the heaps of garbage are toxic and they have gradually settled into the atmosphere here. So basically, we are breathing this poisonous air. Secondly, there has been a direct rise in the population and breeding of mosquitoes in this area – it has affected not just Saraiyya, but the adjoining areas such as Madaiyya, Jalalipura, among others. So, malaria and dengue have become so common here – you’ll find a patient suffering from one of these diseases, in almost every household here.” Ansari also shares a peculiarly horrifying affliction that’s common in the basti, “People are in the habit of lighting up beedis when they use the toilets. A lot of the toxic gases tend to settle inside the toilets and places used for defecation. There have been innumerable cases of fires that have sparked and people suffering burns, as a consequence.”

As the locally elected representative, Ansari says he’s doing his best. He has a long list of grievances relating to the garbage-dumping problem, but is prioritizing as per the urgency. Since monsoons aren’t so far away, he’s currently asked for the spraying of pesticide, to deal with what he terms, not incorrectly, “machharon ka prakop”. But Ansari says he is not hopeful, “They’ve told me when the number for Ward 90 comes up, then they will send in the machines.”

When we ask Motilal Singh, Additional Commissioner, for some accountability, he tells us that the waiting time period is on, “When the time comes for a routine check, it will be done. And then, if something amiss is noted, it will be checked.”

Meanwhile, the Varuna flows along, just as Saraiyya basti continues to live amidst dirt and disease, and as Ansari iterates, “People are slowly dying”.

What else is there to take note of, we wonder?

First published in The Wire.