Jan Sewa Kendras on the Verge of Shutting Down 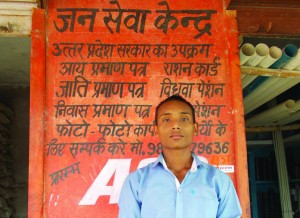 Banda district. As the new government makes big plans to e-connect rural India, Jan Sewa Kendra’s launched as part of the National e-Governance Plan in 2006 seem to be getting the no-confidence vote in rural UP. As part of this plan, several Jan Sewa Kendras (People’s Service Centres) were opened up across districts to provide technology related services in rural India. But investigation on the ground in Banda reveals that the Centres are serving little purpose and are about to shut down.

The Jan Sewa Kendras were supposed to provide people a place where they could get print outs of important documents at a subsidized rate of 20 rupees. The centres were meant to be run as businesses by local community members, but seem to have little cash flow and are crumbling one by one.

Arun Kumar, a resident of Jamalpur village, has been running the Jan Sewa Kendra in the village since May 2014. He says that he is hardly able to make ends meet by running this centre. ‘The government provides no equipment or stipend to run the centres, and so it is very hard to run without additional income.’ Finally, he shut down his Centre in August 2014. On the other hand, Ramraj, Shubham and Bablu from the same village said that they prefer going to the Tehsil or the district to get their paperwork done.

In Khurhand, the centre run by Amol Singh has similar concerns. He says that he is forced to look for alternative work because the government salary hardly meets the running cost for the centre.

In Paprenda and Mawai villages too the situation looks grim. Abhishek from Paprenda says, ‘The centre hardly gets any business. I was making no money, let alone profits. The Centre has been shut for the last few days.’

R.K. Madaan, the Director of the National Information Centre in Banda, said, ‘This district was given a target of opening 144 such Centres of which only about 100 are functional. People who run Centres are allowed to work elsewhere. As a result, those who run the Centre are not given any extra money or equipment.’

Woman Sets Herself on Fire, Succumbs to Injuries