No Incubators in District Hospital: One Infant Dies, One Precarious 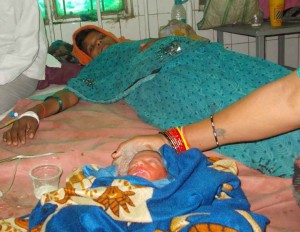 Kamalkheda village, Mahoba district. Parmi, from the Shivhar hamlet of Kamalkheda village gave birth to twin girls on 11 May. While one of the twins passed away a few seconds after birth, the other one along with Parmi has been admitted to the district hospital in Mahoba, where there are no facilities for the weak infant.

Parmi’s mother-in-law Lakshmi told us that this was Parmi’s first pregnancy. On 11 May when Parmi delivered the twins, she had been pregnant only for 7 months. Given the premature delivery, both infants were very weak and one of them passed away almost immediately after birth. Lakshmi said that they brought the surviving infant to the district hospital without delay. They had hoped that at the district hospital the infant would be put in an incubator for a few days to improve her health and make her stronger. Unfortunately, almost a week has gone by and the infant has been staying with her mother in the general ward.

Parmi said that she had been vaccinated during her pregnancy only once when she had just entered her second trimester (fourth month). She held the ANM responsible for not given her other vaccinations due during pregnancy and for not having given her information on procuring iron tablets. She believes that these factors played a role in her premature delivery.

Betibaai, the ANM of the area in turn complained that Parmi had gotten one of the prescribed vaccines from elsewhere since Parmi wasn’t in the village. Betibaai had indeed given her only one vaccination. She went on to say that at the time Parmi was vaccinated by her, she had run out of iron tablets and thus could not give any to Parmi.

Note: In the meantime, Parmi and her newborn daughter are in the general ward while temperatures in Mahoba soar to almost 50 degrees. Doctors have said that the nearest hospital where the family could put the infant in an incubator is a hospital in the nearby Chhattarpur district which falls in Madhya Pradesh. Chhattarpur town is a little over 50 kilometres away.