Brutal Attack on Dalit Woman, Accused Still On the Run 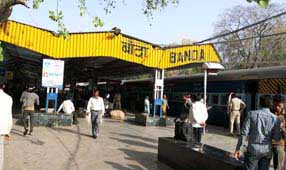 Garauti village, Banda district. A Dalit family in Banda’s Garauti village has accused Ram Thakur of the same village of having brutally attacked their daughter on the night of 14 September. The girl’s family has registered an F.I.R. against Raju Thakur in the Tindwari police station but no arrests have been made yet. The girl’s condition is critical.

The girl’s sister-in-law said, ‘There has been old enmity between our family and Raju Thakur’s family. 10 years ago, Raju’s brother shot and killed my father-in-law. He is in jail right now. It was to avenge this that Raju attacked my sister-in-law.’ According to the sister-in-law, it was late at night when Raju entered their house and drugged the girl to keep her quiet. The girl’s family has alleged that Raju then poured acid into her eyes and crushed her face with a slab of stone lying nearby, knocking her unconscious.

The family said that they discovered what had happened when they heard the girl’s cries a little later. She was rushed to a nearby hospital where the doctor refused to attend to her without a police complaint having been registered.

At 2 a.m. when the family managed to register an F.I.R. at the Tindwari police station, the girl was given medical attention. She was finally referred to the Banda district hospital where her treatment is to continue. She is currently in critical condition and battling for her life.

Ajay Kumar Singh, Inspector at the Tindwari police station, said, ‘We have registered an F.I.R. against Raju Thakur and two unnamed men. A case under sections 307 (attempt to murder), 452 (trespassing), and 506 (criminal intimidation) of the Indian Penal Code and the SC/ST Prevention of Atrocities Act has been registered. When the police went to the village to question Raju Thukar, he was found to be missing. The police are now looking for him.’