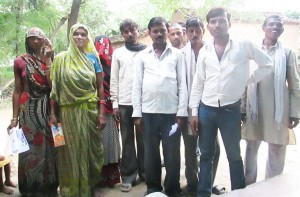 Our families are at the verge of starvation

Mahoba district, Kabrai block, Dadhatmaf Village. 50 men and women from this village worked on a canal for a month nine months ago under the Mahatma Gandhi National Rural Employment Guarantee Act. None of them have received a single rupee for their work yet. They have been making continuous rounds to thetehsil and the Irrigation department for their payment.

Shivcharan, Prabhudayal, Sripat, Pooran, Ghisitiya, Ramdevi, Keshrani and Mamta from Dadhatmaf village said, “We worked on cleaning the canal for a month. The Junior Engineer (JE) of the Irrigation department, Suryabhan Varma had said we would get 200 rupees per day for our labour. We are yet to see a penny from that. Every poor person is struggling for money. Because we were working on the canal, we did not work on our fields and farms, now how do we feed our children? Our families are at the verge of starvation. The Irrigation department is saying Samajwadi Party has held up our cheques. We gave a written request to release our payment on the public hearing day held at the tehsil on June 20, 2013, but the JE says we can do what we want but the payment will not be released. We also gave an application at the Samajwadi Party office. They reassured us that we will our get our money.”

The draftman of the Irrigation department, Bhagirath Varma said, “We had asked for a 40 lakh budget earlier. Out of which 16 lakhs came. And then the administration received orders that the canal work will be done under MGNREGA [which has a separate budget from the district administration]. So we had to return that money as well. That is why they have not received their payment. When the next budget comes, they will all be paid.”