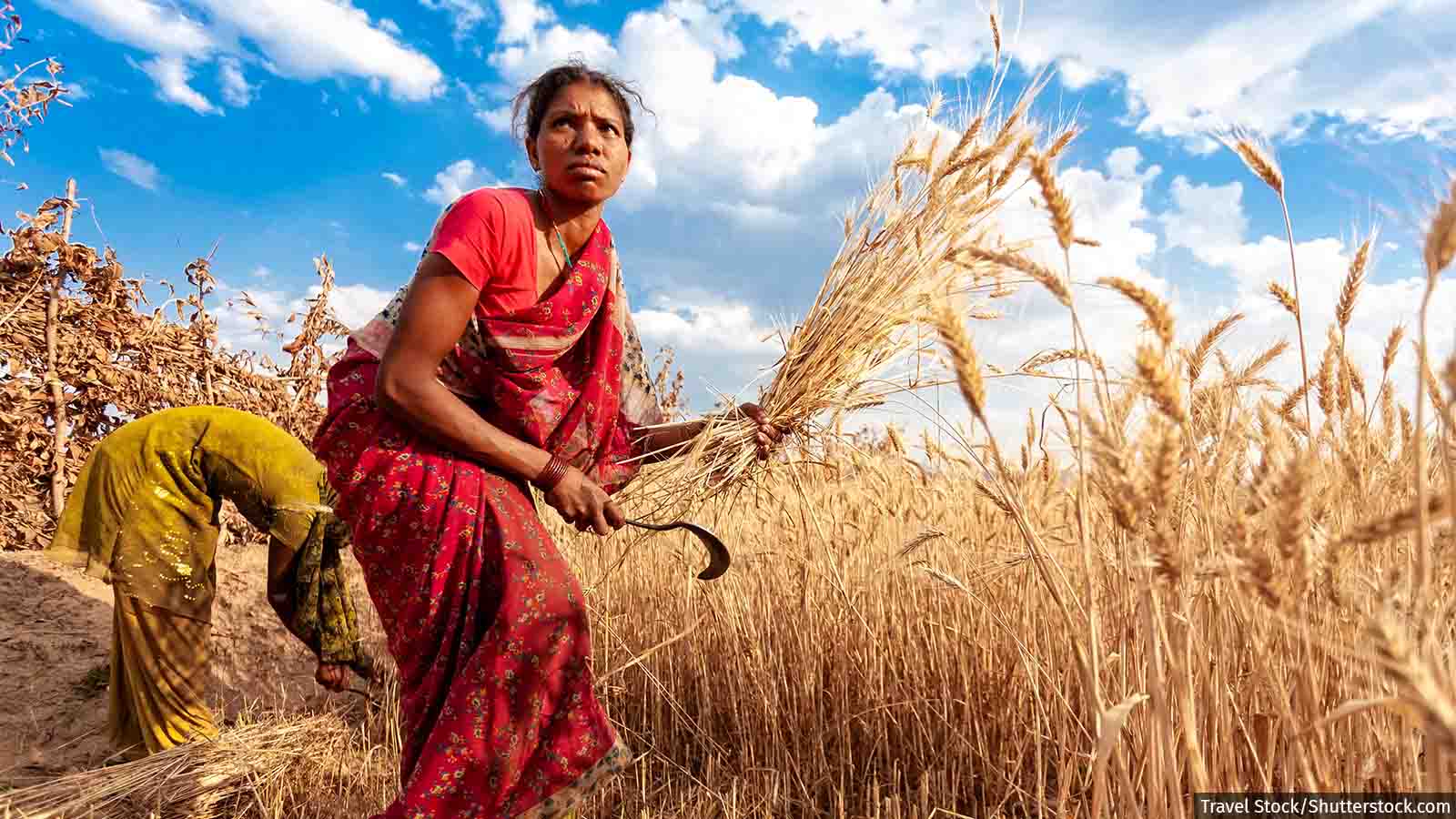 Mumbai, Ayodhya, Mahoba: “A day’s farm work pays about Rs 250 but women earn even less, sometimes around Rs 100. But now that those who work in the cities are back, women’s daily earnings are almost down to Rs 50,” said Kranti Azad, 27, a farmer from Devlaha village in Ayodhya, 135 km east of Lucknow. Like Azad, millions of women for whom agriculture is the only source of income in rural India are now struggling with diminished savings and lost livelihood opportunities.

Though the pandemic led to a recession in India, agriculture has managed to grow, with the Reserve Bank of India describing the sector as the “bright spot” in the economy. But despite undiminished farm output, agricultural jobs and income have fallen with an increase in disguised unemployment, say experts.

Why is this happening? The nationwide lockdown announced in March 2020 led to an exodus of millions of migrant workers from cities to villages, adding to India’s overpopulated and agriculture-reliant rural economy. This employment crisis has disproportionately affected women farm workers in rural India, show ground reports from Uttar Pradesh.

Women in rural India have few employment options, except for erratic and low-paid farm jobs, we had reported in April 2019. Over decades, India has been witnessing a “feminisation” of agriculture–that is, increased participation of women. More than three-quarters (75.7%) of women in rural India are engaged in agriculture, as per the Periodic Labour Force Survey (PLFS, 2019-20). Within the sector, there has also been an increase in the number of women who take on work on farms owned by others, and a decline in the number of female owner-farmers.

In this story, IndiaSpend and Khabar Lahariya report from Ayodhya and Mahoba in Uttar Pradesh on how reverse migration and increased availability of employable men in villages led to a drop in the demand for women farm workers in migration source states.

In Ayodhya’s Devlaha village, Kranti, 25, lives with her parents and works on a small plot owned by her father. Since the produce is barely enough to feed the family, she also works on other farms in the village. Since the 2020 lockdown, she has not been able to find much work.

“Last year, when the lockdown was announced, men who were working in the cities returned home and they took up the farm work that we did,” she said. “We had to sit at home with no income.” Monthly expenses for her family of three add up to nearly Rs 5,000 but Kranti manages to earn only around half that. With no income and a rise in expenses caused by inflation and medical expenses incurred during the pandemic, Kranti had to use up what little her family had saved in the past.

Every woman farmer we spoke to told us a similar story.

In southern UP’s Mahoba district, Chandi Bai works on her family’s 10-bigha farm in Ladpur village. She also augments her income by working as a farm worker for hire. Chandi Bai complained about reduced demand for labour and a fall in wages. “When the migrant workers returned, others in the village stopped getting labour work,” she told Khabar Lahariya. “Earlier we earned Rs 200-250, but now it is less.”

Chandi Bai and her family are struggling to survive because they do not have enough savings. “How can I save? Just vegetables for a single meal cost up to Rs 50,” she said.

Kunwar Bai, 50, a farmer from Ladpur, said that she and other women are often turned away by farm owners who choose to employ male migrant returnees instead.

Reverse migration has also meant a fall in remittances and increased expenses, we found.

“The farming system in states like Bihar and Uttar Pradesh, where a large number of migrant workers originate from, is dependent on remittances,” said Ranu Bhogal, director of policy, Research & Campaigns, at Oxfam India, a not-for-profit organisation. “With the lockdown and the sudden drop in remittances, there was a significant cash crunch.”

Kranti Azad’s household has 10 members, a few of whom were working in cities till the lockdown was announced last year. Their return meant that she had to take on more housework even as the family income fell. The household’s monthly expenses are now Rs 7,000 but its total earnings do not cross Rs 4,000.

“Returnee migrants certainly affected the employment opportunities of women, more so for those who depended entirely on agriculture for wage labour,” said Seema Kulkarni, a member of the national facilitation team at Mahila Kisan Adhikar Manch (MAKAAM), an informal forum that focuses on the rights of women farmers. Return migration also meant that families did not need to hire labour–they had enough cultivators within their families.

Even among women, it is those who are single who have been left more vulnerable by this crisis, reported Kulkarni.

The agriculture sector grew by 3.4% and witnessed record foodgrain production and exports despite the downturn, but this did not result in increased farm incomes, as we said.

Although a spike in farm jobs in July is normal due to the sowing season, the rise this year in this month nearly crossed the average 8-12 million jobs range, as per the Centre for Monitoring Indian Economy (CMIE), a business information company that is monitoring employment trends in India through its Consumer Pyramids Household Survey. But, these numbers hide the disguised unemployment in agriculture–many of its workers are not gainfully employed, said Mahesh Vyas, chief executive officer of CMIE in an interview with IndiaSpend in August.

Madhura Swaminathan, professor and head of the economic analysis unit at the Indian Statistical Institute and chairperson of the not-for-profit trust, the M.S. Swaminathan Research Foundation (MSSRF), echoed this view. “A large number of men have leased land and are self-employed because they don’t have any non-agricultural jobs in towns and cities,” she said, “Here, the number of days you are working are rarely counted. You have nothing else to do, so you go and work on the field everyday.”

Nearly 60% of the employed women in India are engaged in agriculture, as per the 2019-20 Periodic Labour Force Survey. “Women work the hardest in our country and I use the word ‘work’ very deliberately, where I distinguish work from employment. Women are most likely doing three shifts. They are working in the fields, they are working at home–taking care of children and old people–and running the house,” said Vyas of CMIE. “So they’re doing great work but they are not fruitfully employed.”

During the lockdown last year, women farmers earned less because they had trouble selling their crops: More than 90% of the women surveyed in five Bihar districts for an Oxfam India study conducted between June and September 2020 said that they lost access to the market because there was no transport. Nearly a quarter of the 711 women farmers surveyed in a MAKAAM study conducted in May 2020 said the same and added that they could not afford the high cost of transport. Nearly 36% of the 352 women who had taken loans in the previous year were not able to repay them.

As savings dried up with little to no income, the lack of access to credit also impacted women farmers. This made it hard for them to invest back into farming or livestock.

The second wave’s impact has been largely caused by the disease itself. Women farmers were not able to access the kind of credit that was available during the first wave, said Kulkarni of MAKAAM. “Nobody was willing to give any kind of cash benefit to women farmers as there was no guarantee that the person would live [to repay the loans].”

For women, gold and backyard poultry are wealth, added Kulkarni. “Every year, they keep pawning their gold because money has to be pumped back into the fields. Usually, there is some recovery and they are able to get back some of what they mortgage. This year, because they said they have been facing these problems for over a year, they have absolutely no wealth to mortgage or pawn.”

In the Bihar study, nearly 44% of the respondents said that they had taken a loan in the last six months and personal jewellery was the collateral in 87% of the cases.

While anecdotal accounts highlight the struggles faced by women farmers, limited data and studies make it hard to comprehend the extent of the impact nationwide, said experts. “Most studies are household-based, they speak to the head of the household who will be a man,” said R. Ramakumar, economist and professor at Tata Institute of Social Sciences, Mumbai. “These surveys don’t ask questions on intra-household inequalities, differences in outcomes and so on.”

As most women farmers do not own land, they do not have access to government schemes and other benefits. Only 10% of the respondents in the Bihar study reported having availed loan under the Kisan Credit Card scheme and over half (50.4%) have not received any assistance under the Pradhan Mantri Kisan Samman Nidhi Yojana.

The impact of the pandemic on agriculture and women farmers will be long-lasting though it is not apparent right now, said experts. “Agriculture is not just about sowing and harvesting. It is also about investing in the land and regularly developing the land,” said Bhogal of Oxfam, “The situation may impact farming in many ways–for example, farmers may reduce the amount of fertilisers being added as they become more expensive.”

Loan burdens will continue this year, predicted Swaminathan, “It is not a one-time effect. With incomes down to zero, how else will the households manage consumption? There will also be an impact on the input costs.”

This article was first published on IndiaSpend.