The Old Women of Bundelkhand Waiting for Money that Isn’t Coming: The Pension Problem, in Four Portraits

In an ongoing series on rural finance, in partnership with Firstpost, Khabar Lahariya deep dives into its various facets, exploring the nature and details of daily transactional activities in Bundelkhand.

Part Five presents a photo-essay that urges you to gaze into the eyes of those whom the system has left behind.

If the youth is the demographic this government sees its future reflected in, it is only logical perhaps that the aged is the generation that are entirely redundant. Digital Bharat simply has no patience for them.

Avdesh Singh, the Block Pramukh (the representative of the panchayati raj structure at the tehsil level) in Naraini, Banda, also happens to double as the ‘pradhan pati’ or representative of the pradhan in Guda Kala village in the same tehsil. He’s a shiny-cheeked, gutka-scented, easy-going officer who seems to handle with confidence the double responsibility of the elected official who links the village and the tehsil, and ensures entitlements flow to the beneficiaries they are meant to.

Puneet Tandon, the Probation Officer, who sits at the Social Welfare Department in Chitrakoot (which sees to the disbursement of pensions, amongst other schemes) is similarly glib about the ignorance and inefficiency of would-be pensioners; they are blamed for incomplete applications unaccompanied by adequate documentation – aadhar cards, income statements (which need to be updated every three years by the concerned Lekhpal – multiple times in the lifetime of one pension application, as it turns out), death certificates, updated bank records.

Something or the other is always amiss, always missing. And the old, he says, can’t deal with the new online system.

The ones who can, are the Jan Sewa Kendras, often holes-in-the-wall with dusty laptops, meant to facilitate digital applications. They charge between 50 – 100 rupees an application, and wave off the wrinkled, rheumatic pensioners, sending them back home, always telling them the same thing: Your application is complete.

Which, in fact, it never, ever is.

And this is how the alluring Digital Bharat becomes a black mirror reflecting a distorted cast of characters with no role to play in the country’s economy.

Their days are numbered. 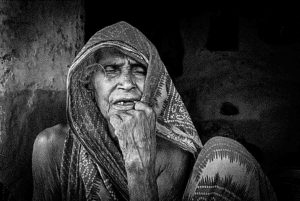 Raniya: They’ve stopped my application, they said something was wrong. Asked them why? I’ve worn myself out running around. I’d told the pradhan to do the paperwork. I’m dependent on my son now. 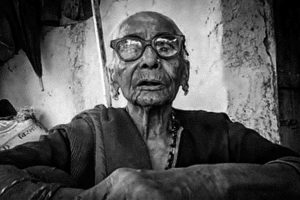 Hirabai: My daughter supports me, and if she didn’t, I would die. I have a ration card and I get some quota of grains from that. I’ve asked for my pension many times, I’ve gone to the Tehsil, they don’t give it to me. 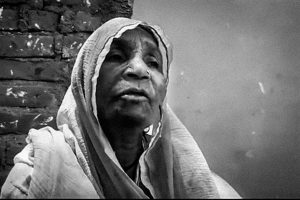 Lalita: I must have filled 50 forms. I’ve been filling them for 20 years. I’ve spent 500 rupees filling forms. They just chase me away and said your pension hasn’t come, go away.

Shanti: There are at least 30-35 widows in this mohalla, their husbands all died from alcoholism. We sort waste, work in people’s houses to feed ourselves. No, we don’t get any state support.

This article first appeared on Firstpost. Read Parts One, Two, Three, & Four, of this series.