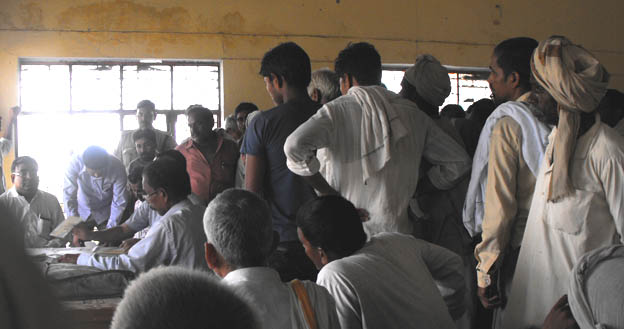 Faizabad district. On , more than 1500 hopeful farmers from 21 villages were handed cheques in Poora Bazaar block. The paltry compensation, meant to provide instantaneous relief, has left most farmers distraught. Despite wide variations in crop losses, farmers of Poora Bazar, Maya, Tarun and Bikapur blocks are being given the minimum compensation of 1500 rupees.

Ram Ujagar, a farmer at Rasulabad whose entire crop in his three bigha farm was ruined said, ‘1500 rupees is an insignificant amount compared to the losses most of us have incurred. We did not just lose our crop. We’ve also lost the earnings we would have made by selling this crop. How can 1500 rupees cover this?’

Mastram from Vijainpur Sijahra village whose crop in his two bigha farm got destroyed, was disgruntled with his 1500-rupee cheque. A frustrated Umakant from Damodarpur village said, ‘I have four bighas of land, yet I’ve also been given 1500 rupees. How can everyone get the same amount of compensation?’

When Shanker Dubey, the Additional District Magistrate was asked about the same amount of compensation being doled out to all farmers, he said, ‘Compensations are not for covering up losses but are being given to provide farmers’ temporary relief. We are simply complying with orders from the State government.’ When asked how this amount had been fixed for a majority of the farmers he said, ‘The lekhpaals (panchayat member in charge of maintaining records of land) were supposed to measure each farmer’s loss. The amount for each farmer was decided based on the report submitted by the Lekhpaal. The focus at the moment is to provide immediate relief to smaller farmers who lost more than 33% of their crop. If the people are unhappy and think that they have not received proper compensation, they can send out a complaint about the same to the State Government.’

According to the guidelines laid down by the Uttar Pradesh government, 1500 rupees is the minimum amount of compensation to be given to farmers who have suffered losses in the wake of unseasonal rainfall in the last few months. Other than that, the guidelines state that the compensation amount for non-irrigated land is 4500 rupees per hectare (1 hectare being equal to 4 bighas) and 9000 rupees per hectare in the case of irrigated land.

Father Beats Daughter and Husband to Death, Arrested for Murder