Login
खबर लहरिया Bundelkhand & Beyond River Under Threat in Chitrakoot

River Under Threat in Chitrakoot 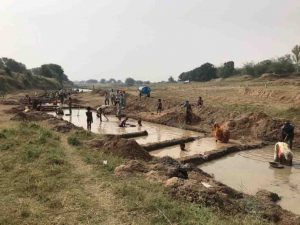 ‘She who flows calmly’. That might be the meaning of the beautiful-sounding name ‘Mandakini’, but the Mandakini river in Chitrakoot – filled with muck, filth, puja debris, and even a corpse or two, as we learnt this last weekend when the body of a 10-year-old girl was fetched out of it – would we reckon, be flowing anything but calmly.

A tributary of the Alaknanda nadi, which eventually joins the Bhagirathi to become what we know as The Ganga, the Mandakini river is considered sacred in Chitrakoot, the district with deep religious resonance, given its deep associations with Lord Rama himself. And like all holy rivers in the country, this one too is damned precisely because it is a holy river. The Ganga, for instance, the holiest of them all, has been flagged as one of the world’s ten rivers on the verge of extinction, according to the World Wildlife Fund. And the 65-odd kms long Mandakini, besides being polluted, is also drying up today.

We spoke with the local mahant Prem Puri, who used the word “pavitra” often, and told us that he bathes quite regularly in the Mandakini. He shrugged at us mentioning pollution, “Bade bade sant mahatma bhi nahaate hain ismein (Even wise old saints bathe in it),” and added, “Yes, it might make us fall sick. Par ab kya karein? (But what can we do about that?)”

The Mandakini is a lifeline not only for Chitrakoot town, but as an important water source for 20 adjoining villages in the district, the river provides sustenance to many. Jugnu Khan, a local peer of ours in the media frat, is clear about the situation. Standing at the river bank, he says, “This is the river that is giving us all drinking water. Some might be using water filters and R.O.’s, some might be using more backward methods of water filtration, and some might be getting water from the pipelines provided by the water department, but this is the water that is nourishing all of us.” Khan is quite certain of where the lack is, and places great faith in policies, “If only this river can also get attached to one of the government’s flagship programmes on the river, such as Namami Gange, we would see a difference. Namami Gange is a great policy.” He is also certain that given the district’s religious linkages, this is a possibility.

But Khan might only be indulging in wishful thinking, at several levels. Namami Gange, the national mission to clean and rejuvenate the Ganga, launched by Prime Minister as a flagship programme of the BJP government, which covers approximately 87 ghats in Uttar Pradesh, is all but set to miss its March 2019 deadline. Recent talk has even hinted at some Adani muscle and might taking over the project, even as Nitin Gadkari (in)famously remarked that people would be blaming Modi himself, if the policy should fail.

People in Chitrakoot, meanwhile, have been volunteering in a bid to do their best to save Mandakini. Nadi safai and nadi shanti candle-lit vigils and marches have been a common occurrence at both the rural and kasbah levels in several pockets of the district. The issue itself is a widely-covered one, with national-level, Hindi-language media local reps reporting and writing about it often – keeping both the religious tourism and pollution angles in mind.

There have been efforts at the district authority level. Vishak G. Iyer, Chitrakoot District Magistrate, told us about the mapping drive that is currently underway, wherein source points are being marked and recorded across the length and breadth of the Mandakini – a task undertaken as MNREGA work. Iyer tweets about the river often, and shares an ambitious plan, “We are in the process of forming the Mandakini sena. This army will comprise a cadre of volunteers, from across fields, such as social activists, local activists, gram panchayat members, the youth, and anyone else who wishes to save the river, and they will be enlightened and then activated with the sole purpose of protecting the Mandakini.”

And while nets to catch the remnants of a recently-concluded prayer at the ghats have sprung up at a few places across the river in Chitrakoot we notice, a driven attempt to preserve this “lifeline” seems unlikely. As Shivram Baran Phalhari, a local who lives close to the ghat, says, the anger in his voice apparent, “When it’s time for a photo-op, they quickly clean up the area that’s going to be in the photo. That’s all I’ve seen happen.”