Panchayati Raj and Women – Looking back a decade 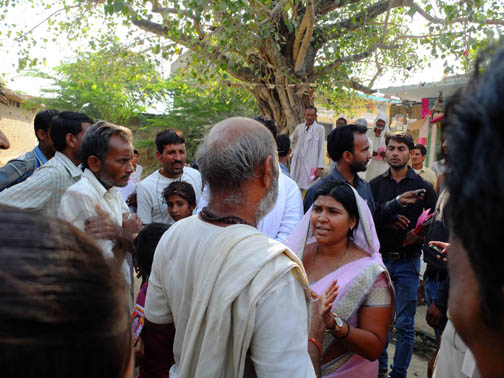 This story dates back to 2005. Panchayat elections had been declared in Uttar Pradesh (UP), and Khabar Lahariya was going to be covering them for the first time. It had been 10 years since reservation of seats for women in Panchayats was announced. Given this context, we wanted to ask what candidates thought about the politics of Panchayat elections: Why did they want to enter politics? What were going to be their priorities during elections and what dreams were they weaving for themselves?

We set out to search for these answers, and for candidates who could provide us with them – pens, notebooks, cameras and excitement in tow. Panchayats with seats reserved for women became our favourite haunt. Pahadi block had a woman contesting for the top position in the Panchayat and we started our search there. We tracked her house down and had a conversation with her husband. When we spoke to her she gestured towards her husband and said, ‘He is the actual candidate. Now that the seat has been reserved for a woman, he won’t be able to contest, but ultimately he is going to do the work.’ Upon further probing she said, ‘I don’t know much about elections and politics. Please direct your questions towards my husband.’

After many futile attempts in Pahadi we ventured further to find our next candidate. The next stop was Manikpur block where we found Soniya and Sanjo who were contesting from Nihi panchayat and Gidurha panchayat respectively. They both belong to the Kol caste and had previously won elections and served as Panchayat heads. Having received empowering support from feminist organizations based in those regions, they were able to independently stand for elections.

Panchayat elections were announced again in 2015-16 and this time around we received radically different answers for why women were contesting these elections. “I want to show people that not everyone is the same in politics. I don’t play dirty politics, I don’t make promises, I just do my work.’’ “I always wanted to contest Panchayat elections. When the reservation for women was announced, I made my intention clear to my husband and finally got what I wished for.” “People have faith in me. My husband will take care of the town area and I will look after my ward. If he has helped me contest these elections, then he better be prepared for my success.”

These were some of the brave answers we heard in Bundelkhand. Susheela- a single, Dalit woman was the winner from Kolmajra panchayat in Chitrakoot district. She is currently independently serving in the Panchayat despite facing hardships during the campaigning and elections. This year 44% women won in Panchayat elections, out of which 11% won from General category seats.

Women sought votes in the face of limited resources, political pressures and widespread systemic corruption. Even those who were contesting as ‘daughters-in-law’ or ‘wives’, campaigned with gusto. They campaigned during the day, moving from one house to another, and even at night with the help of mobile flashlights. The voters were warmed by their words as they urged them for their support and confidence. We noted that this year as well, information and encouragement bolstered the elections campaigns for women.

Read the story in Hindi here