Odds on the Underdog

Breaking down the Famed Election-Swinging Dalit Vote in Bundelkhand 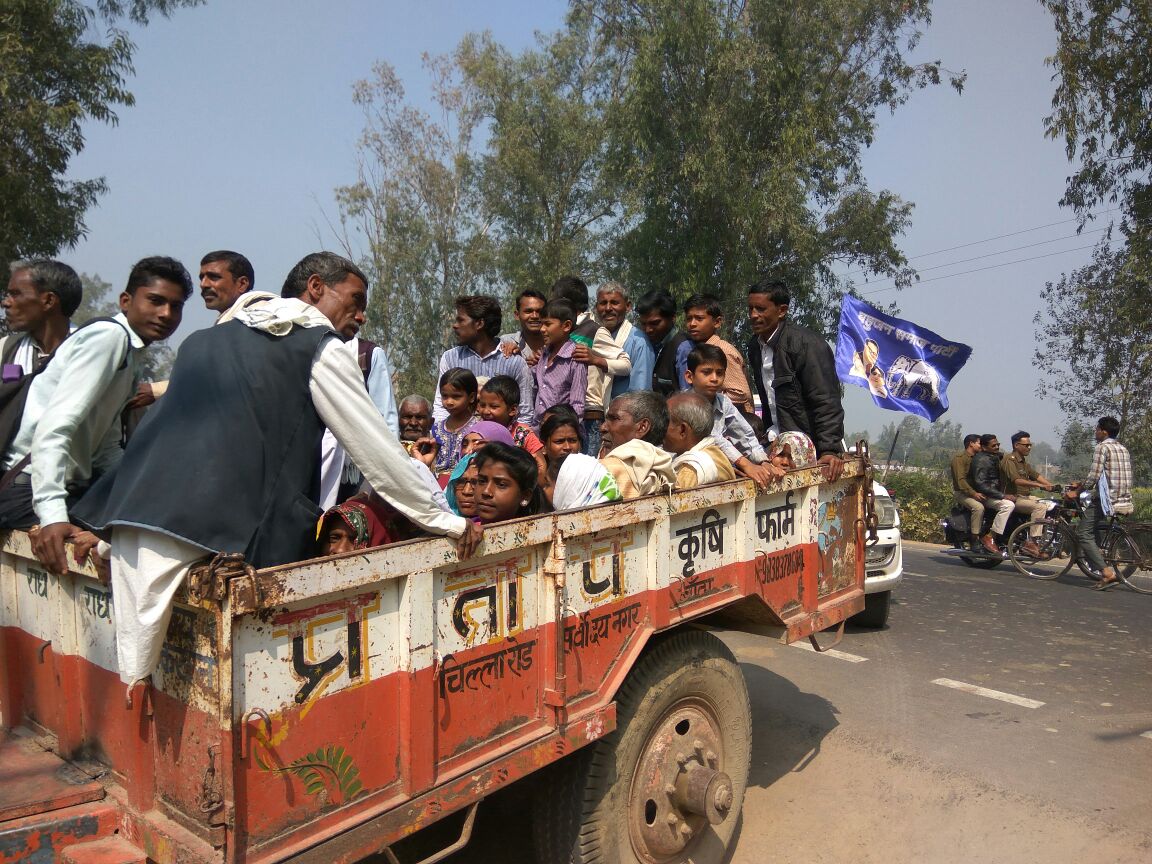 “Patel Patel ko support karta hai”. The speaker of this local truth was a young boy, a man-child, we’d met at the Kabrahi temple erected in the name of the dacoit Dadua. His certain tone had relayed this information as if he was stating the obvious – the Kurmi brotherhood is an axiomatic QED in these parts. Even the dalbadlu neta RK Patel, BJP’s candidate from Mau-Manikpur, Chitrakoot, much-maligned for his turncoat politics, is still able to sway the Kurmi vote when he appeals to it.

Caste politics takes many forms in Indian democracy, but is a dabangg worth being well informed about in rural Bundelkand. With a Dalit population pegged at 21.1% as per the 2011 census, it’s most heightened during election time, when everyone is thoroughly absorbed in eyeing the Dalit vote bank.

This year, with drought, migration and farmer suicides on the rise, coupled with stasis in the name of development and a new generation coming of age in Dalit villages across Bundelkhand, where Dalit politics and mobilisation much changed from five years ago – there is significant weight to the question of how the Dalit vote is going to play out this polls.

Here’s an overview of how the big players seem to be faring thus far.

You could say it started with Amit Shah’s holy dip in May last year at the Ujjain Kumbh: the party supremo creating a huge brouhaha around hanging out with Dalit sadhus. The gesture allegedly caused many raised Sanghi eyebrows, but Dalit-pleasing tactics have been on the BJP agenda ever since. The continued appropriation of Ambedkar and his visionary ideals into a vision at the centre by none other than Modi himself is not a co-incidence, and neither is the appointment of Keshav Prasad Maurya as the BJP UP chief, he who rides on the “gareebi, sanghi” factors and most importantly, wears his OBC tag firm on his sleeve.

While the party focus might be on UP for now, the nature of the beast is such that internal politics are no longer the only truths one has to contend with anymore. Where, for instance, are the tickets for minorities?

But report after report has suggested a “leher” in the party’s favour – the overriding logic being that after years of giving BSP and SP far too many chances, people are willing to “try out” the third option – not unlike the Modi wave of 2014, which, similar to UP of 2017, relied solely on the power of a Modi aura. And so while there is still some lingering rage against the BJP from say, migrant workers who had to return to their villages and dire circumstances due to demonetization, their big city contractors delaying or downright refusing payment, there is a turnaround towards the party among those who would’ve traditionally pressed the button next to the elephant.

– Overheard at a BSP rally

It was in Bundelkhand that legendary figure and founder of the Bahujan Samaj Party Kanshi Ram, icon of the Dalit rights movement who rose from activism into politics, cemented his foolproof “pachasi versus pandrah” formula, while assimilating Dalit and other backward caste votes (to total 85% of the voting population). His protégé and current head of the party, Mayawati is trying out an all-new version of Kanshi Ram’s equation in 2017, it seems, with her mobilization of Muslims alongwith Dalits. This election, the BSP has given tickets to 99 Muslims – the highest figures ever by BSP in UP – and to 87 Scheduled Caste candidates, in a well-crafted electoral strategy that rides hard on caste arithmetic. Dalits and Muslims make up around 40 percent of UP’s population and this coming-together, if it works, is all-set to cause serious upsets.

However, word on the ground does provide some cause of concern for Behenji with oft-heard iterations that while crime did lessen even in dacoit-infested areas of Bundelkhand while she was in control, there was very little offered in terms of development. Even as the big game of aarakshan only benefitted a handful – read the rich.

Added to this are the generational changes – both within the party and in its voter base, between the old guard and the new cadre. To play devil’s advocate though, while it might be true that younger people are free of the baggage of older generations and distant from caste politics, or observing caste realities from a difference perspective, are they are not shaped by the trials and tribulations of their mothers and grandmothers? We’re not so sure. On the contrary, young Dalit pockets of trader-rich, and BJP-swinging Banda, and even Faizabad, swear by the BJP still, as the party who will give them status – in government or their own communities. And despite much cynicism of leaders who have left the fold, or money exchanged for seats, we still hear of how “visible” some of the party people are – like in Naraini, Banda where BSP candidate Gaya Charan Dinkar is seen and respected.

Either way, the numbers speak for BSP in some ways – even in 2012, when BSP lost to SP, the party’s own vote share was 26%, enabling a win of 80 seats. And in the case of a split verdict come March 11, which seems more and more likely, Mayawati’s role as kingmaker cannot be denied. There is no political analyst worth his or weight in gold who could ever proclaim otherwise.

When it comes to young Akhilesh’s popularity ratings – everyone from a bunch of eight-year-olds heading to school to a college girl and all our aunties seem to like him and even gush forth profusely at times.

But politics is not simply about who’s likely to be prom king this year.

Akhilesh’s crowd-pleasing tactics are well-known to all who were given laptops with cycle desktop wallpapers embedded in the hardwiring (even, especially, those who had no electricity back home to charge them with), and his communication at rallies this time around has been no different. From uninterrupted power to cash compensations for a displaced labour force, or suicidal farmers, Bhaiyya has said it all. Often with Dimple Bhabhi beaming alongside. But just like not much has been offered by way of the SP-Congress agenda on violence against women – apart from the lip service paid again and again, to the 1090 helpline – we haven’t heard anything concrete on Dalit issues either. If he’s eyeing this vote bank along with Rahul Gandhi, then he doesn’t seem to be advertising it. A sliver of it perhaps is all we managed to glimpse in our meetings with Sampat Pal, Gulabi Gang commander extraordinaire and the Congress candidate from Mau-Manikpur this year, who has always aligned her political ambitions and promises with the Adivasi Kol community of Bundelkhand – a severely marginalized group that has yet to be given SC status.

Bhaiyya’s popularity might meet with a sea of resonance and Kaam Bolta Hai might be a catchy slogan, but there are clouds looming on this gathbandhan, which don’t seem to be swaying the Dalit vote. Perhaps the satirical take on the mantra coined by Akhilesh himself apparently – now heightened in lieu of rape accused minister Gayatri Prajapati going missing, Prajapati an SC caste in UP – is ominous of what to expect on counting day. Kand Bolta Hai, some are calling it.

IV. Lest we Forget the Charpai

There are other stakeholders in this crucial arithmetic – the parties perhaps not as huge as SP, BJP, or BSP, but still important players in the great gamble of the Dalit vote.

There’s Daddu Prasad, of the Chamar sub-caste, his personal history akin to a microcosm of the larger Dalit narrative of prejudice, struggle, and pushback. Belonging to a family of bonded labourers, Daddu strove and fought to find a toehold within the political landscape of Bundelkhand – the churn of the Dalit movement propelling him, as he was growing up, towards Kanshi Ram and BSP. He went onto become a BSP MLA thrice and was part of the cabinet of Mayawati herself from 2007 to 2012.

Time passed, relationships soured, accusations flew, and Daddu quit the “party of, for, by Dalits” to form his very own – the Bahujan Mukti Party. Grand notions of “Ambedkar values” and a disavowal of what he terms “upper-caste campaigning”, such as hoardings and the use of mass media, you’ll often find Daddu’s prachaar showcased on the walls of Dalit homes, in killer graffiti style – his party symbol, his “mouth-media”, a charpai. Often accompanied with the line ‘Na thekedaar, na lambardaar, Humein Chahiye Daddu Pehredaar’.

Does that translate into watching over and watching out for his Dalit brethren? And more importantly, is that how he’s being perceived?

At the end of the week, come Holi, we’ll know for sure.