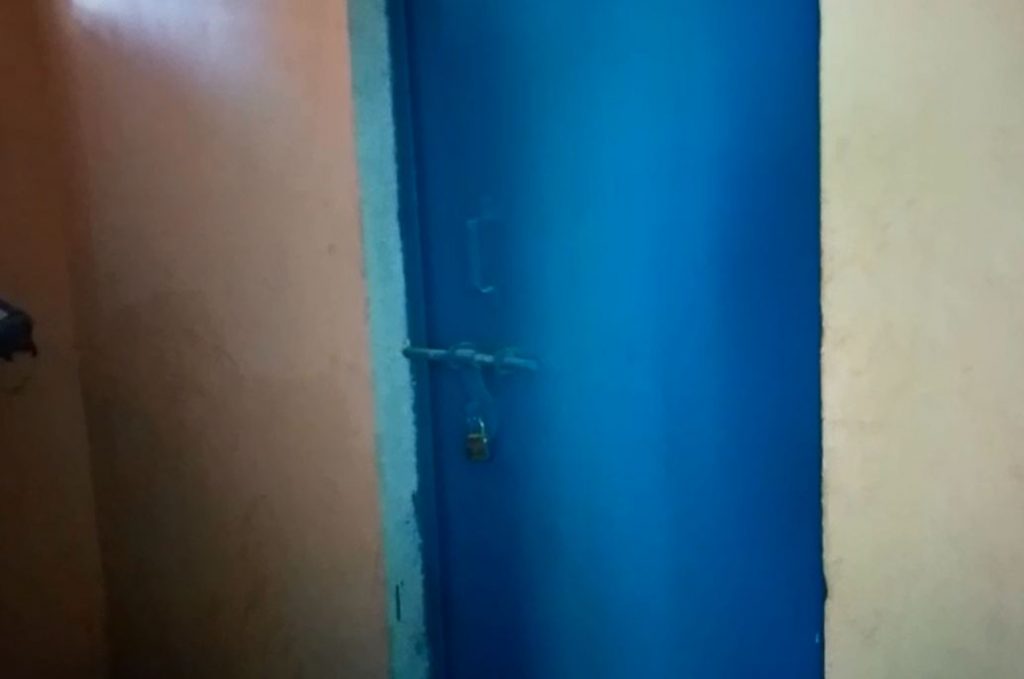 The future to a healthy rural maternal health scenario seems locked, literally. A report from the delivery ward of a Mahoba PHC

“This door is locked, see?” points out Sharda, jangling the lock hanging on the latched door to emphasize her point. Standing in front of the attached bathroom in the maternity ward of the primary healthcare centre in Jaitpur, Mahoba, Sharda is rattled. Having accompanied her pregnant daughter Rita to the PHC (primary healthcare centre) for her delivery, Sharda discovered complications she hadn’t expected, which had nothing to do with the pregnancy. “If she has to go to the bathroom, where should she go?” she demands, anger evident in her voice, “She can barely walk, she is in pain, she could fall. She’s just recovering from the delivery itself, but now this additional trouble.”

The PHC in Mahoba, we must add, has one other bathroom adjacent to the delivery room, but it is a virtually impossible walk for a woman who’s just delivered, or on the brink of delivery. Not to mention the fact that this is a common bathroom, and hence meant for anyone and everyone in the PHC.

According to the Indian Public Health Standards (IPHS) Guidelines for PHCs, it is “essential” for waiting rooms, labour rooms and wards to have attached bathrooms–separate for men and women.

“I had to go outside to use the toilet because the toilet here is locked,” says Rita, lying in the ward bed, swaddled in blankets. She had delivered her baby at 10 am the same day. “If we have to go, we have to go out in the open, because there are no other provisions,” she adds. Rita endured this in fact, and speaks in a weak voice, laden with simmering emotion, “People were looking at me because I was relieving myself in the open. I was angry, but I had no choice.”

Rita’s admission also takes a dump on U.P.’s 100% Open Defecation Free statistics, a statistic that has been loudly cited by the state and central government alike because it represents the success of PM Modi’s pet project, Swacch Bharat. A two-part blow, too: not only did a governmental facility not have accessible toilets, but also the fact that the only available option to Rita outside the PHC was the open means that there is a lack of public toilets in Jaitpur, one of the 97,641 ODF villages in UP.

The one other option available to Rita, as explained by Narvada, the local ASHA worker, was not a viable solution, “We can’t afford to take her from here to there. There is risk involved.”

Post delivery, women often suffer from vaginal bleeding and tears, let alone postpartum complications, all of which necessitates rest – a toilet being handy is a clear must. Expecting new mothers to walk to the delivery ward’s toilet, or squatting in the open is needless to say, an inhuman assumption. As of 2017, the latest available data, there were 3621 functioning PHCs in U.P.; the fact that there is no compiled data available about the construction or maintenance of toilets in the rural healthcare centres speaks volumes.

“If it’s blocked, how will you use that bathroom?” says Archana, the ANM (Auxiliary Nurse Midwife) who works at the PHC and maintains that the toilet was locked because the flush was broken, “Only when it is cleaned can it be opened.” According to her, the bathroom had only been shut for two or three days – a claim that the patients vehemently disagreed with. Upon asking her what the holdup was, even if it was about having it cleaned, Archana obstinately looked away from us, refusing to answer.

“I actually did not know until now that the toilet is shut,” says Dr. Sunita, the main healthcare physician of the PHC. “If it is true, then I will find out and investigate.” Promising to look into the matter, Dr. Sunita adds, making it seem that it would require some kind of deep investigation to unlock a lock that belongs to the PHC administration, “We have only found out this information today, so we will do our best to resolve the matter to ensure that the women who have recently delivered children do not have to suffer.”

In brightly painted letters outside the maternity ward it says, ‘The Jachcha Bachcha Ward is open for 24 hours; it is essential that one stays in the hospital for 48 hours after delivery’; it is one of the many signboards in and around the ward that have instructions for expectant and new mothers, information about welfare schemes and encouragements for institutional births.

While there is no dearth of maternal healthcare intervention schemes like the Maternal Benefits Program, the PM Matru Vandana Yojana and Janani Suraksha Yojana, all with the clear mandate to improve rural maternal and infant health, it seems like absurd issues such as locked toilet doors will continue to set our nation’s villages back. And continue to fail our mothers in rural areas.

This article first appeared on The Wire.