On polling day in Banda, a blazingly hot day in the fifth phase of our endless great Indian election, we saw not one, but five auspicious Blue Jays, or Indian Roller birds: the ones that foretell the victory of good over evil, Rama’s victory over Ravana.

“It was as important to come back, as it would be if someone at home was gravely ill and dying”: a one-time communist, Ambedkarite, BSP mobilizer and farmer from Chitrakoot said recently that this election a call would be put for all the workers who migrated from Bundelkhand to come home and vote.

Bundelkhand witnesses the highest rates of migration in the country, with at least 50 to 70 percent of rural households having at least one annual or permanent migrant. In this scenario, both contesting political parties and the ruling administration ran campaigns and mobilizing teams urging voters to return.

Besides this pull exerted by the political and bureaucratic system, is there something that urged a migrant worker to come home, all to vote?

We went back to see if the wise old man’s words were true, the day Bundelkhand’s most important seat, Banda, went to vote. And indeed, people had returned, taking flights from Saudi Arabia, packed themselves and their babies into unreserved train compartments, left daily-wage jobs and thriving businesses to come home to vote.

Did this all add up? In the Banda-Chitrakoot Lok Sabha seat, with 12,99,291 registered voters, and more than 47 percent of Banda’s rural families reporting casual or seasonal migration, 60.79 percent voting was recorded.

What is the weight of a vote here? Khabar Lahariya asked migrant voters what hope they carried if any when they pressed the button on the electronic voting machine.

Jamal Mohammad, a painter working in Saudi Arabia who returned to his village in Banda just to vote, said unhesitatingly: “I don’t come for all elections. But I came back this time because it’s important to change the government, which has only deceived the people, especially farmers and the youth.”

For others, it’s not so much of a choice. Guddan, a brick kiln laborer in Gwalior, traveled by train with several toddlers in tow. She and her husband Soni admitted to being intimidated into voting. They were told their family’s Aadhaar cards would be canceled and they would be rendered ineligible for government schemes if they did not vote. 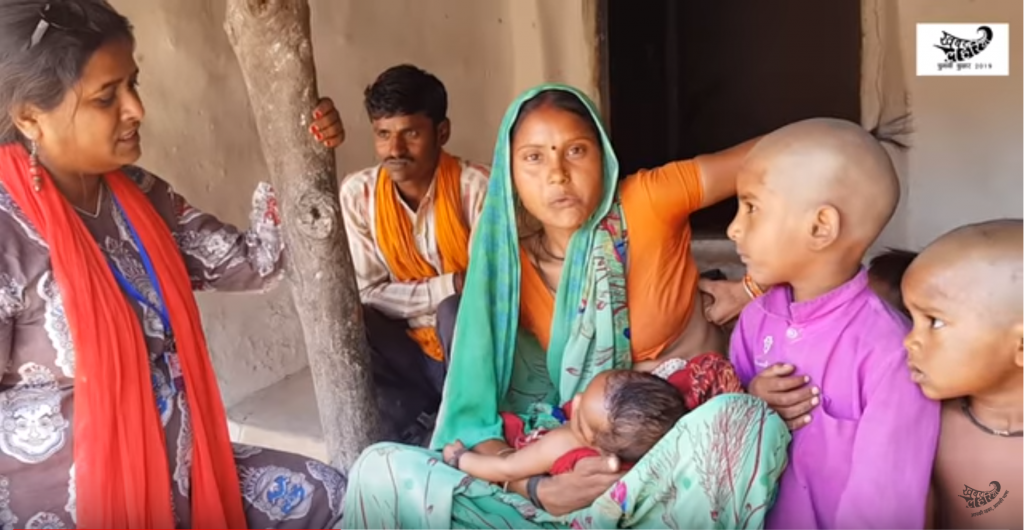 Soni hopes that with the new government, all the broken roads of their gully would be repaired and their families would be deemed eligible for funding under the Pradhan Mantri Awas Yojana. Sampat, another brick kiln worker in Gwalior, claimed the village pradhan asked her to vote for Modi when calling her family members to return for voting day.

For decades, many such families in Nehari village, Naraini block of Banda, who migrated en masse, have been carving out a life of sorts in the kilns of Gwalior. Most belong to the Kumhaar community. Urmila, another brick kiln worker, migrated 20 years ago, right after getting married. She talked of how her children have grown up without schooling, having to accompany them to work. She also came because of the pradhan’s notice but claimed she voted according to her own choice. With the new government, she hopes that all the brick kilns will be shut down and better employment options will be provided closer to home, where her children can also study.

Chotu Prajapati, a semi-skilled worker who was pooh-poohed when we spoke to him amidst a crowd, later told us at his home that the vote in the village cannot be swayed away from the powerful upper caste who own 60 percent of the land, who have been benefited considerably by the government’s policies. “The other 40 percent, including communities like ours, don’t have land, homes, education, and so we work away from here and don’t reap the benefits. But our votes won’t change anything,” Prajapati said.

Whether or not that is true, it seemed that there was an urgency to mark their presence. It was deeply upsetting then when laborers like Mamta and her husband did not find their names on the voter lists after making the tedious trip from Gwalior. The same pradhan who called them washed his hands off the affair. She complained that their names haven’t been added to the Awas Yojana too, and are hoping that the next government will do so.

Many from their extended family have not found their names on the lists of those eligible for the Awas Yojana. Their group of 10 to 15 people, all brick kiln workers, had traveled by train from Gwalior, without sitting, carrying children on their shoulders. Mamta’s brother-in-law Kejriwal wishes for a change in government, one that will examine the problems faced by more than 20 lakh brick kiln workers who migrate and are not able to educate their children. He talked about how he wasn’t swayed by the pradhan’s intimidation tactics and genuinely believes in his duty to vote. He hopes for a change in government.

For many migrants, casting a vote may have been a painful and costly exercise, but others said it has been a straight road to affirming their approval of the regime. Shatrughan Shukla, a businessman in Kanpur, returned to his village in Banda to vote: “This time, I voted for the nation’s security, development, and Modi’s integrity.” What did he mean by security? “Now, Pakistan is given a firm reply whenever they attack us, which was not the case with previous governments. Now the army enters houses of Pakistani terrorists and gets them killed,” he said.

He vehemently disagreed when the ‘development’ that has happened in the district is questioned, and pointed to a nearby electric pole. He also said that for vikaas to reach all areas, it will take more than five years, which is why he wants the government to continue.

Annu Tiwari, the brother of the village pradhan — who was indisposed — denied that the migrants were bribed or intimidated into returning to vote. As for the critical question of why so many people had to travel far in search of a livelihood he said, “There has been a lot of NREGA work going on since December. The more pertinent reason is that people are given higher daily wages at the kilns, than the Rs 175 given from NREGA. 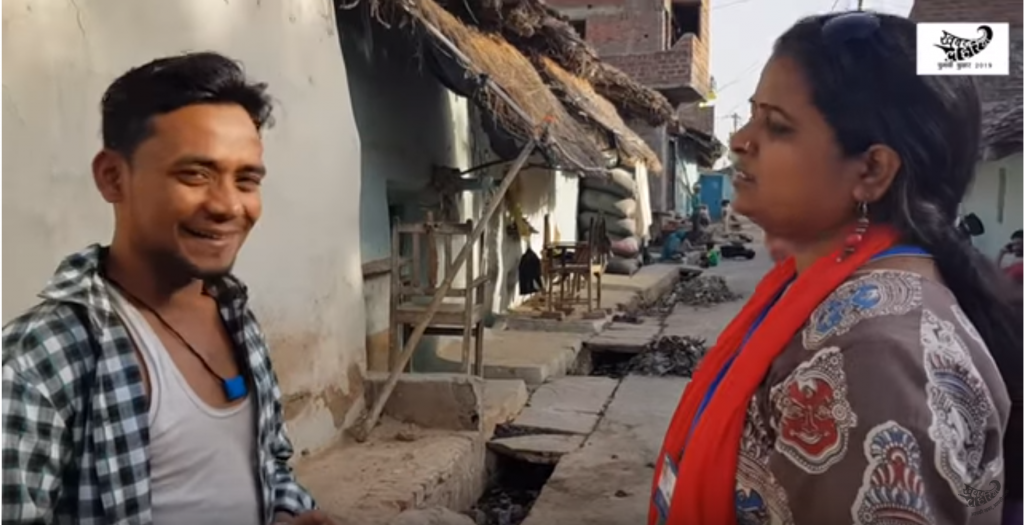 This claim did not hold up in Hussainpur Kala village in the same block. Mohammed Siddiqui, a migrant laborer who works in Mumbai, pointed to the rundown lanes that lead to his home, which has broken down many times during rains. Though back to vote on the request of a higher authority, he too nursed hope for change, like every migrant voter in Banda.

Some names have been changed to protect identities.