Khabar Lahariya Gets a Bold Makeover 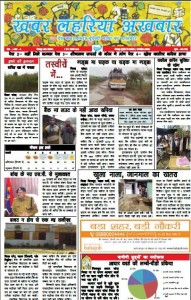 Why would a rural weekly newspaper suddenly adopt a new design and take on the mainstream newspapers head on? Why would Khabar Lahariya, running successfully for more than a decade in parts of rural Uttar Pradesh, change its look and size and try to reintroduce itself to rural readers?

Starting February 2015, Khabar Lahariya started a new journey in its oldest districts – Chitrakoot and Banda in the Bundelkhand region of Uttar Pradesh. For the last 12 years, the local language weekly newspaper had been a channel of communication and information between rural populations in far off villages and the local block and district level administrations. At a time when independent print media are struggling to stay afloat, Khabar Lahariya was able to continue largely due to the support from its rural readers. It was on the demand of these readers and evolving information needs in rural India, that the newspaper decided to change not only its look but also provide additional content on a greater variety of topics.

The Chitrakoot and Banda editions have now been combined and a single edition for both the districts in the broadsheet size is being produced. The idea behind this is to make news for each district more inclusive of neighbouring areas that share a very similar context. With all 8 pages now in colour, the newspaper has also roped in women journalists from rural and small town India, and women writers and commentators from various fields. The newspaper also carries various special columns – astrology, food, sports and local business trends are only a few of them.

A special column has been fixed to incorporate a comment from a reader of the newspaper. This has been done in a bid to make the newspaper even more interactive than it was earlier. The new avatar of the newspaper promises more from rural areas, and vies to become a stronger connection between policy-makers at the Centre and the State and rural populations and their day-to-day issues.

This is a first attempt where editions from two adjacent districts are being combined whilst retaining the hyperlocal flavor that the Bundeli language attributes to the newspaper. It is an experiment that we attempt to master and replicate in the near future.

Wine Shop in College Vicinity, No Action Taken Despite Complaints