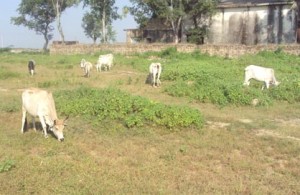 Banda district. After the devastating loss to farmers this season, now the impact is rippling further in the form of a shortage of fodder for cattle. According to the Department of Animal Husbandry, an assessment of the need for fodder is being undertaken, on the basis of which it will be provided free to cattle owners.

Gopal, a farmer in Ryan village, Baberu block said that he owns two bullocks and a buffalo. ‘Each year, from my 7 bighas of cultivation, I get 10 quintals of chaff from my wheat and pulses crops. This year I’ve barely been able to get 2 quintals of chaff from my wheat crop, the rest has just rotted. All my money has been lost in what I put into my crop – how do I buy the remaining 6 to 8 quintals of fodder that my animals need?’

Lallu, of Chakla village in Tindwari block says he has 4 buffaloes, ‘The milk from these buffaloes are what run my household expenses. I would buy 70 quintals of fodder at wholesale prices every year. What do I do this year, when the crop has rotted in the fields? The little fodder that remained in the fields got swept up in a dust storm when it was about to be cut. I have no cultivation of my own. When I think I must sell my buffaloes, I think I will die of hunger.’ Lallu and Gopal’s woes are compounded by the high investment that purchase and rearing of buffaloes involves: they are valued at between 50,000-80,000 rupees in Uttar Pradesh.

Chandradutt Sharma, the District Animal Husbandry and Veterinary Officer said, ‘The department will provide free fodder to cattle rearers. A government order has been issued for the department to do a survey. The numbers of cattle and the requirement of fodder will be released the form of a survey report. In any case, after the crop has been harvested, the animals are grazing on the alfalfa on the fields, and by the time the monsoon comes, more fodder will be organized.’

The assurance of the administration notwithstanding, much detail on the process of the survey was not available, since the order had just arrived last week. In the meanwhile, village economies in UP are in flux, with fodder prices shooting up from 200 rupees a quintal to around 600 rupees a quintal. As in the case of the losses to crop, here too landless cattle rearers are deeply affected, forced to be dependent on landowners for chaff at inflated prices or some kind of support until the crisis passes.

Tremors Across the Hinterland – The Lesser Known Stories