An unregulated stone-crushing industry is turning Bundelkhand to dust.

“My land has become infertile. Earlier I could feed my family with what I sowed, like wheat and chana etc,” Rajkumar, a farmer in Bharatkup village of Chitrakoot district laments. He along with other farmers of the Bundelkhand region are facing a barren future due to the pollution caused by the stone crushers of the area. “A farmer could grow enough to earn for a year in two to three bigha land earlier. Now even ten bigha is not enough,” says Kalu Ram Kushwaha from Kabrai village in Mahoba district.

Stone-crushing is a profitable business in the mountainous regions of Bundelkhand and around 600 stone crushers are operational in the region. Just like the mountains gave refuge to dacoits to carry on their operations almost unhindered, the stone crushers also benefit from the isolation of the region: little attention is paid to law. As an industry it often accommodates illegal operations and is poorly regulated for pollution and working conditions. Deaths happen regularly and labourers are paid low wages and forced to work in highly polluted conditions. But the industry’s effects don’t just end here. Villages around the stone crushers are now covered in a thin, white haze of dust released into the air by the crushers. The blasting creates large levels of noise pollution and the water and soil contamination has reduced the productivity of the farming land.

“It’s in the food, in our water, it gets inside our homes. When you wake up in the morning you can see you are covered with a film of white dust. It’s all airborne,” says Chhotelal from Bharatkup. Shramani, another villager from Kabrai, points to the floor inside her home. It is coated in a visible layer of white dust. “I just mopped this floor today morning. You can see the vegetables are covered in it.” She plucks at the leaves of saag that sits on her lap.

Serious health conditions are pervasive in the region and residents point to the pollution from the stone crushing machines as the reason. “The labourers who were working at the crushers are sick. About 70% of the people who work there fall sick,” says Kalu Ram Kushwaha. Another resident Phoolchand claims serious illnesses like cancer are now prevalent because of the pollution, “TB, cholera, cough. It causes all sorts of diseases. People work for some time and then they fall sick and leave.” 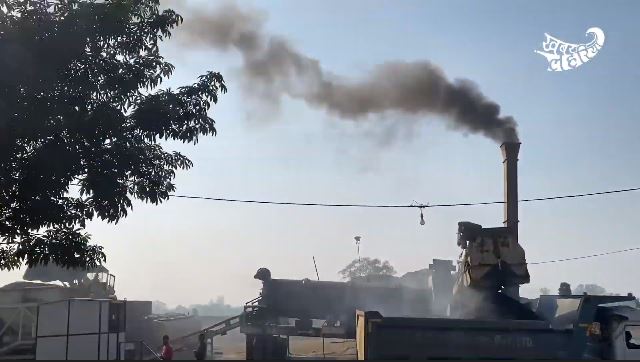 Bureaucratic red tape, arbitrary guideline enforcement and lack of proper communication have all contributed to the pollution getting out of control in the region. As per the guidelines set by the Pollution Control Board, stone crushers have ensure they are a safe distance away from habitat. Guidelines include that the mine should be 500 meters away from highway, railway track, river and living habitat. The stones and ash created by the crusher should have water sprinkled on it constantly and as per the area ratio, greenery should be planted around. Pintu Singh, a crusher-owner from Bharatkup, Chitrakoot says that it is not always possible to fulfil the government’s demands. “Currently we are 100 meters from the road. When we got the license these rules weren’t there. There was no such thing like a Pollution NOC for crushers. This plant has been set up in 1975-1976. I have received these guidelines last year.”

Capitalistic concerns aside, the pollution that the crusher business creates is obvious for all to see. The residents of the villages are well aware that simple measures like dousing the area with water can help reduce the dust particles being released. Chhotelal says there is a general apathy towards their well-being because the owners can get away with anything. “There are no measures being taken to control pollution. Can you see any owner here of this crusher who is dousing the area with water so that the dust doesn’t release into the air? No one is doing anything about it.”

This is not the first that the residents of the area have raised a concern. In 2016, the Prayagraj Allahabad High Court passed a judgement in response to a PIL filed by Rajkumar of Bharatkup village. The court mandated that the crushers’ license be rescinded. The owners then filed a counter-suit alleging the accusations as false. And not much later, the work had started again, the crushers were working at full capacity. In a low employment area, this is not hard to pull off. A day’s work at the crusher pays double of what one would get for daily wage with MNREGA. The choice the residents are being forced to make is between the air they breathe and the income they live on. The crusher-owners know the leverage they have for a land where there are hardly any other opportunities.

Indu Prakash, Sub-divisional Magistrate, Chitrakoot, says the ball is in the Pollution Control Board’s court. After inspecting 49 crushers that were under investigation, a committee was set up by the District Magistrate who came up with recommendations for the industry. “The recommendations are that since the stone crushers are already there, they should get two to two and a half years to shift their operations away from habitation. Also, the distance between the habitat and stone crushers should be reduced from the required 500 meters. This flexibility gives them some leeway to continue operating without harming their surroundings. But these are just recommendations and it is up to the Pollution Control Board to take them up. Once they tell us the course of action, we will implement that.”

On the other hand, the Pollution Control Board representative refused to speak on record as according to them, the requisite action has been taken and requires no further comment from the their side. As per their records there are 17 crushers out of which only 4 are functional. And in Chitrakoot, there are 75 crushers and only 20 are functional. In Hamirpur all 5 have been shut down. And in Mahoba there were 283 out of which 202 are functional.

The administration seems to have reached some bureaucratic dead-lock. The regulation of the industry is still barely implemented. And the residents battle between hunger and clear air, land and water. The situation is not just about pollution and its control. It is about developing a sustainable model of employment that does not hurt the environment. In Kabrai, all crusher activity has been halted for three months and the residents realise the price they are paying. “It’s a bittersweet situation because there is so much unemployment. We need a solution for the crushers so that they don’t pollute the land. We need proper rules so that we can have employment,” sums up Kalu Ram.