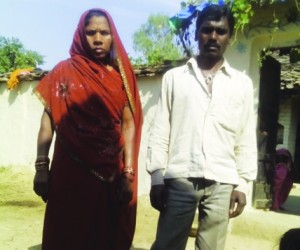 Chitrakoot. On 21 February, 13-year old Dileep was killed in an accident in the Bajni hill-quarry of Rauli Kalyaanpur village here. His uncle Ramesh was severely injured. His older brother Rakesh has lodged an F.I.R. with the Karvi Police Station but points out that no action has been taken even after a week has gone by.

The incident takes on grave significance against the backdrop of strong critique of the functioning, and possible redesign of the National Rural Employment Guarantee programme, one that provided employment to rural labour, decent conditions of work, as well as amenities of childcare.

‘Most of the people from our village work in Bajni Pahaad, a stone quarry near the village. On 21 February, Dileep came to the worksite to deliver food to me. Suddenly the machines started the process of blasting which breaks big rocks into tiny stones. In these powerful blasts, Dileep and Ramesh were severely injured. We rushed them to the district hospital from where Dileep was taken to Jankikund Hospital. He died the next day. Ramesh is still in the hospital,’ said Rakesh.
Rakesh, who is from a poor Dalit family in the village, says that most adult members of the family work on Bajni Pahaad. ‘ We get paid a daily wage of Rs. 200, which makes this the best option for us daily wage labour, even though the work and conditions are difficult, ‘ says Rakesh. Work on the Bajni Pahaad quarry is currently contracted out to one Indraprasad. Repeated visits to his house were in vain. His son, Somprakash said that his father was out of town and was unavailable for a comment about the incident.
The clerk at the Karvi Police Station that a case under Section 304 (culpable homicide) and under the SC/ST Act has been filed against Indraprasad. He added that an investigation into the incident was currently under way.
Pramod Kumar Singh, an officer with the Minerals Department of the district, said that the Department would look into the details of the case. ‘If the owner is found to be responsible, serious action can be taken against him,’ he said.
0
FacebookTwitterLinkedinWhatsappEmail
पिछला लेख

One Woman, Many Battles