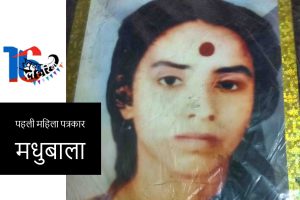 Meeting with Banda’s first female news-maker feels like a study in meta storytelling for us – there is not only déjà vu, but also a sombre sense of how little has changed over the decades. When Madhubala Srivastav, now 86, started out as a journalist in the badlands of Bundelkhand, there were little to none women in her profession locally. As Meera Devi, Khabar Lahariya’s Chief Reporter, with an experience of 12 years in journalism, who went to meet Madhubala ji at her residence close to the Kiran College roundabout puts it, “So many women dropped out of Khabar Lahariya because of social, family reasons. This field is not considered appropriate for women, everyone cites it as unsafe.”

A petite, elegant lady greets us, draped in a crisp cotton dhoti, and while her voice is very soft, her words are hard, as she narrates anecdotes of her time, “I went to the temple on a lead for a report and people refused to speak to me. I was told there’s no such thing as a woman reporter. So, I said out loud, ‘Look at me. I am one. I am a mahila patrakar.’ I then went inside the temple premises gave a speech against my husband.” Sensing our confusion, we prod further and soon fill in the blanks. Her husband, we learn, was a journalist too, and the speech was akin to a diatribe against the male specie in general!

Madhubala ji started out as a reporter for Amar Naveen newspaper in 1956, and then went onto work at Kranti Krishna and Swatantra Bharat. She spent the largest chunk of her professional life – 17 years – as the Banda district reporter for The Pioneer. Post that, she was nominated as the head of the local journalists committee.

Vimal Krishna Srivastav speaks proudly of his mother, “She’s a double M.A., in English & Social Sciences,” and goes onto share a few more stories that he’s told many a time, we reckon. He tells us about how she moved into social work and also tried politics when she fought the Vidhan Sabha elections as a Congress candidate. How she went to jail during the Emergency under the MISA Act – a story that Madhubala ji likes to narrate herself too, raising her forefinger as she tells it, as if in defiance still.

One story of her activism is part of current feminist folklore you could say – one of those stories that you never read about in history textbooks. It was the time when a woman had been denied treatment at the government hospital, so Madhubala ji pulled off her dhoti and spread it out on the ground, asking for chanda for the woman’s operation. She managed to collect 20,000 rupees in a matter of a few hours after which the resident doctor announced that he would contribute the rest of the amount himself and conduct the required procedure.

Perhaps it is the cosy bubble we have managed to create here at Madhubala ji’s home, as peers and survivors, but we decide in the moment to choose the affirmation, and focus on it. Like Meera, who found herself in a Madhubala afterglow for a few days, having drawn strength from the aura around Madhubala ji – something she attributed to her “jazba and power”.

Madhubala Srivastav was one of the first female news-makers in a region not conducive to her choice of profession, and that’s putting it mildly.

But perhaps that is enough today.