What Decides the Fate of Undernourished Children? 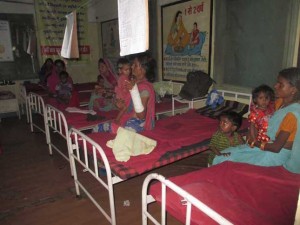 The Sitamarhi NRC is almost 40 kilometres away from Sheohar town

Despite such serious issues that affect development and health, the District Nutrition Rehabilitation Centre in Sheohar that had been established about ten years ago has been shut since May 12 this year due to construction. With this being the only centre that caters to a population of just over 6.5 lakhs, people have no option but to travel for seven hours to hospitals in Patna, located 140 kilometers away or to the hospital in Muzaffarpur, nearly three hours away. Families of children in Sheohar who are severely malnourished are being turned down access to basic medical facilities. Officials at the centre are waiting for instructions from the state government about alternative arrangements that can be made for such cases.

According to Susheela, who works at centre number 49 and Urmila Prasad who works at centre number 50 in the district’s Tariyani block, malnourished children were initially sent to Nutrition Rehabilitation Centre as soon as they came in. However, as the centre has shut down now, they are clueless about where to send critical cases. They have not been informed by senior officials about what steps to take next.

According to ASHA workers Seema Singh, Ruby Kumari and Asha Kumari, renovation of the building will take time. They feel that senior officials need to be contacted immediately. Sunil Kumar, the District Coordinator of the Nutrition Rehabilitation Centre, shares that the earthquake on 12 May had damaged the Centre’s building. The coordinator has sent a letter about this to the state government and he has clearly stated that any action will only be taken once further instructions are received from there.

Toiling Without Pay Since a Year, ASHA Workers Demand Wages