Sookha Rahat continues to be a misnomer for these farmers of Chatarpur, in Bundelkhand, Madhya Pradesh 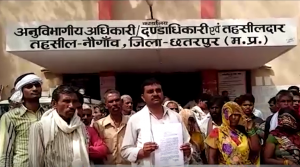 Patwari. A term used in the local parlance to refer to an individual who maintains ownership records for a specific area and undertakes collection of land taxes and also other monetary tasks and transactions. In Chatarpur district’s Naugaon block, Logasi village residents staged a protest on Tehseel Diwas on May 15 and submitted a petition to fire their local patwari. The reason? He’s aiding the drought compensation packages for those farmers afflicted by unseasonal drought in exchange for a few beneficial monetary transactions. Logasi farmer Prem Narayan Patel alleges that the ask is of 2000 rupees, “Those who’ve coughed up this amount have got their compensation. And those who haven’t – rather, those who cannot – are still waiting.” Plus, there is the all-pervasive brazen attitude of the machinery, he adds, “Jaaon sunakar aao jisko sunana hai, they say it to our faces.” Rajendra, also a Logasi farmer, affirms the allegation, adding further that the amounts have gone up to 5,000 as well, in some cases. He’s been doing the sarkari office rounds for a few months, he says. When Shivkali approached the patwari, she was asked to give 1,000 however, in a small-mercies situation, but it is still unaffordable for her, she shares.

The fact that an entire village has been fueled into perpetuating an essentially corrupt practice is not up for questioning here. And this is a systemic breakdown.

Drought management in Bundelkhand, which cuts across the two states of Uttar Pradesh and Madhya Pradesh, is a drought-prone region – designated as such. Decades upon decades of drought-management policies here have restricted themselves to mitigation measures only. These include, primarily, the digging of trenches, the building of check dams, and the construction of workable irrigation systems, customized to the area. Very few of these star measures however have seen real on-ground work, or indeed, impact. Add to this the fact that the 2016 Drought Management Manual, an offshoot of the 2009 Manual, has an overwhelming drop in the fine print of financial assistance from the centre to the states, and the farmers have a lose-lose situation in their desperate hands. ‘A Memorandum for assistance under the National Disaster Response Fund (NDRF) will be submitted within a week of the declaration of drought only if the calamity is of a severe nature’, reads the new manual.

The patwari at Logasi gaon has gone M.I.A. and we’re unable to locate him for an official response. B.B. Gangele, the S.D.M. at Naugaon, promises quick action against the patwari, “if the allegations are proved correct”, at a hurriedly-called-for press conference of sorts.

In the meanwhile, Prem Narayan Patel Patel is gathering forces for a hunger fast.

This article first appeared in Firstpost.