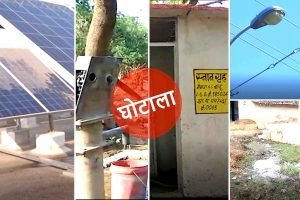 Khabar Lahariya follows the money trail on the one thousand and one policies implemented successfully in a Bundelkhand village. All on paper.

We know what a scam smells like, now that we’ve followed the paper crumbs in Paprenda village in in Tindwari block, in the district of Banda Bundelkhand, Uttar Pradesh, which has led us to a house of evil that can only thrive in U.P. A deep look into and some legwork on the local policy execution has revealed glaring gaps in actual on-ground work, complemented with a tick-mark on the official checklist. And glaring gaps are the good news; in several cases, the gaps are replaced by zero work, which makes it clear that somebody somewhere made a lot of money.

From 2010 to 2018, a total of 1,011 fully functional toilets have been constructed in Paprenda, on paper. In the vein of Amitabh Bachchan exhorting rural India to ‘darwaza bandh karo’, ‘fully functional’ translates into doors and locks, besides the required mechanisms indoors. But it’s hard to find even one such toilet in all of Paprenda. Ward member Vineet, equal parts angry and cynical, plays the role of an anti-guide as he takes us on a tour of Paprenda, “Dekhiye,” he says, pointing out the sarvjanik shauchalay (community toilet), “Yeh aane jaane vaalon ke liye hai. Lekin use nahi kiya ja sakta (This is for visitors, but unusable)”. Kamlesh, a Paprenda resident recalls the celebratory air that was vibrant in the village late last year, “They had dhols playing, declaring that our village was finally shauch-mukt (ODF). Nothing could be further from the truth.” Swachch Bharat and ODF come at a price, and it’s hard to reckon who’s actually paying those entitled.

But these are not just the flagship policies and the crores of rupees pumped into them that have borne the brunt of corruption. In Paprenda, budgets upon budgets allocated for development – from roads to hand-pumps – have disappeared down the drain that doesn’t exist here. INR 3, 60, 000 was sanctioned for the installation of hand-pumps between 2016 and 2018 for the express purpose of solving a 20-year-old water problem here, but as local ward member Ramnaresh Yadav puts it, “The water that this hand-pump spews out is not fit for drinking for either our animals or us. This has been the scenario for over six months now.” Funds that came in for repair work were to the tune of 3 lakhs, while an exclusive INR 75,000 had been set aside for reparation of street lights alone. In Paprenda, you’re hard-pressed to find even one decent streetlight that does its job properly.

Records-digging revealed more, turning out to be an exercise in peeling the layers of corruption. We learnt of slightly bizarre budgets, such as the one allotted for solar panels – in the collective lifetime history of Paprenda’s residents, not once has a solar-powered machine been introduced here, and yet the funds allocated under it until 2018, were 3, 37, 000. Asking the locals about suraj urja and its face in their village, is like playing a tragic round of Never Have I Ever.

The laying of khadanjas (brick roads) and reparation work for 2016 has until now been sanctioned 3 lakh. This is, hands down, Paprenda’s own favourite grouse in the scam saga, given the abysmal state of connectivity the village has due to lack of proper roads.

Vineet highlights another big Paprenda peeve – the corruption around the Mukti Dham, the space demarcated for burials and funerals that has not been built according to standard norms. There is no rest for the dead either, it seems. “This was during the SP reign that 25 lakhs had been allocated. But nothing happened then. And look at the state now.”

As we decide to visit the panchayat bhawan, the state of Paprenda is crystal-clear: The bhawan is filled with shit, literally. Shit and “afsaron ki manmaani”, says Vineet.

Meanwhile, all we have to do is the Math.