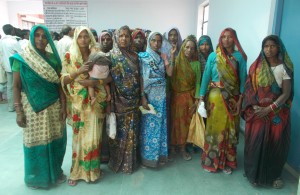 Turra village, Banda District. While the Akhilesh Yadav government announced a new scheme – the Samajwadi Pension Yojana – on 5 November in Lucknow, the scheme’s first phase has left out thousands who are eligible as per the rules laid out in the scheme. In Banda district, a large group of women marched to the Atarra tehsil to submit a request saying that their forms hadn’t been filled out even though they were eligible under the scheme.

As per the Uttar Pradesh government’s announcement of the scheme on 5 November, pension holders under the scheme will get an annual increment of Rs. 50 on the base amount of Rs. 500. In the first phase of the scheme, 12 lakh beneficiaries from the Scheduled Caste nad Scheduled Tribe groups, 10 lakh from the minority group and 18 lakh poor beneficiaries from backward and other categories have been chosen. The scheme is open to both the rural and urban poor.

On 3 November, an open meeting was held in Banda to discuss the scheme and the application procedure. Rajuliya, a resident of Kumharan Purwa said, ‘No forms were filled at the open meeting. I come from a landless poor family. Many names that were there in the list are of those who are financially better off and some even have their own land or a stable job.’

Block Development Council member Shambhoo said, ‘There are very few forms that we have been asked to fill out from Banda. In comparison, the number of beneficiaries is much greater. There are 6000 voters in this area but we’ve been told to fill only 238 forms. How many forms will we fill? Whatever forms we are filling, are being sent to the Block.’

In all the confusion at the Tehsil Diwas on 18 November, women from Turra were only able to submit their request as they wait for more funds and more directions to come from the State.

Crime in Mahoba: 2 Deaths in 2 Days