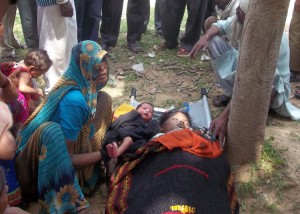 Banda district.  Angry protests followed 20-year old Gaura’s death in Banda on 20 August. Gaura, a resident of the district’s Mahua block had given birth to her first child on 18 August but passed away a couple of hours later at the Mahua primary Health Centre. Her family has blamed the Health Centre’s doctor and A.N.M. Gaura’s family and others from their village sat in the middle of the road with Gaura’s body and her newly born child demanding justice.

On the afternoon of 18 August, Gaura was brought to the Primary Health Centre (P.H.C.) by her sister-in-law Sangeeta. Sangeeta said that at about half past 4 ,Gaura gave birth to a girl, but an hour later she started bleeding profusely. Sangeeta informed Rajarani, the A.N.M. stationed at the P.H.C. Sangeeta has alleged that Rajarani asked for an amount of 5000 rupees to administer an injection and medicines to Gaura. According to Sangeeta it was only after she gave Rajarani 100 rupees, that Gaura was given an injection and a pill. An hour later Gaura was also put on the drip.

When this did not work, Rajrani told the family to take Gaura to Banda for further treatment. Sangeeta said that Rajrani forced them to get into the ambulance. By the time the family was able to prepare to take Gaura to Banda, she died at about 6 in the evening. The family strongly believes that had time not been lost when the A.N.M. demanded money from them, Gaura might have lived.

On the other hand, the accused A.N.M. said that since Gaura was bleeding profusely, she gave her a tablet of Paracetamol and a Methagine injection. When the situation got worse, the A.N.M. immediately referred Gaura to the District Hospital in Banda. According to her, it was Gaura’s family who wasted too much time in arranging for money and that’s why Gaura died. The A.N.M. Rajrani went on to say that there was no woman doctor at the P.H.C. because the doctor appointed there, Dr. Mandira Dixit, was attached to the District Hospital. In light of staff shortage, all her time is spent at the District Hospital and she is never available at the Mahua P.H.C. Moreover, the P.H.C. was forced to refer most cases to the District Hospital because of the absence of necessary equipment and facilities required during deliveries. 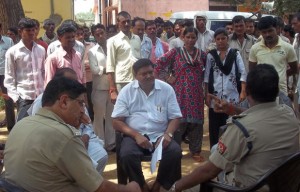 The Medical Superintendent at the P.H.C., Dr. M.C. Pal said that he had gone to meet the Chief Medical Officer (C.M.O.) in Banda. He said that as soon as the A.N.M. informed him, he asked her to refer Gaura to the District Hospital. He, in turn, blamed the family’s carelessness for Gaura’s unfortunate death. The C.M.O. Dr. Capt. R.K. Singh said that the Additional Director would now look into the matter. The Sub Divisional Magistrate (S.D.M.) of Atarra has been asked to head an inquiry and an F.I.R. has been lodged under IPC Section 304 (culpable homicide) against unnamed personnel of the P.H.C.. The C.M.O. did admit that questions about the doctor’s duty crop up and if found guilty, the responsible personnel might be removed from their posts.