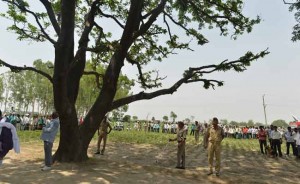 On May 28 this year, two girls were found hanging from a mango tree in Katra Sadatganj village of Uttar Pradesh’s Badaun district. Despite national and international outrage around this crime, there has been a shameful silence after national investigation agency, the Central Bureau of Investigation, released its report on the incident. Khabar Lahariya reporters visited the village to probe the case further and found some unsettling gaps, which call out for further investigation.

The two minor girls were found dead early in the morning of the 28th of May, after being missing overnight. On the basis of the medical report filed on the 29th of May, the girls were said to have been raped and killed, and then hung from the tree on which they were found. A CBI investigation began on the 12th of June, and according to the report released five months later on the 11th of December, the girls were neither raped nor murdered, but had allegedly committed suicide. All five accused in the case have been declared innocent.

Khabar Lahariya made a preliminary visit to the village to begin to investigate the questions and gaps revealed after the CBI report. We spoke to family members and neighbours to ask about their views about the case, post the CBI investigation.

The first fact not addressed in the coverage of the case, is that the constable present at the time of reporting the incident, and who did not file the FIR as soon as the parents had come to him, Sarvesh Yadav, was a relative of the main accused, Pappu Yadav.

Another question, raised by the younger girl’s father, Sohanlal Singh, along with others in the village, is whether the criminal records of all these men, and especially Pappu Yadav, have been checked. It only took a few conversations with other young girls who live in Katra Sadatganj, to know that his harassment of girls was a common occurrence in the village.

Thirdly, where is the doctor who did the first medical examination of the girls’ bodies, and on the basis of whose report the girls were said to have been raped and murdered? The CBI report raises questions on important pieces of proof in such cases, such as postmortem reports.

If we go so far as to believe that these girls committed suicide to uphold the honour of their families, or that the fear of having her relationship with the main accused Pappu Yadav was the reason that the elder of the two girls committed suicide, what was the reason for the younger girl’s death? Why has there been no further investigation to probe the allegations of honour killing, and the reasons behind this? The brothers of the younger girl mentioned that officials had been visiting the village to build pressure to accept the findings of the CBI report.

The parents of both girls say that they don’t know how the legal battle will proceed, but they will not give up till justice has been done.