No resettlement, but relief camps being uprooted 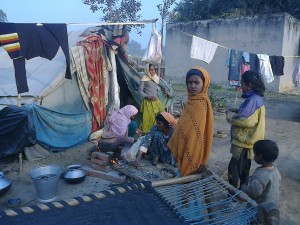 Rahmila, who lives in Shahpur camp with her three brothers says that none of them have got compensation. The Idgah camp here has been uprooted. Where should we go, when we have no home? Our children’s education is at a standstill. Shaukat, from Kutba village, has been living in Bassikalan camp and says that he has received compensation but his three brothers, who have different households and ration cards, have not. We’re told, you’ve been given compensation, now leave the camp. But how do we build houses this quickly?

Askari Naqvi, a lawyer with the Joint Citizens’ Initiative (JCI, a collective of organisations and individuals involved in relief work in Muzaffarnagar) says that rehabilitation is not just about delivering compensation to the survivors of riots. Rehabilitation means shelter, food and education. The government is absolving itself of this responsibility by saying compensation has been given. In addition, giving compensation to the head of a family, when multiple members of families have lost houses, cannot be accepted.