Much Talk but Toilets in Shambles in Villages 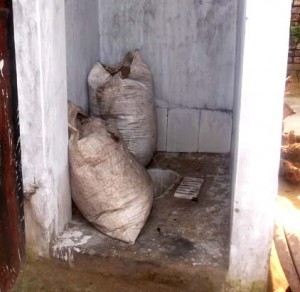 Toilets and cleanliness are in the limelight this year, with the Central government under Modi launching the high profile Swachchh Bharat Abhiyaan, and galvanising state and private players to invest in rural sanitation. Khabar Lahariya ventured not far from the state capital Lucknow, where 54 Gram Panchayats have toilets which are being used for storage of grain or have been abandoned due to their dilapidated condition.

Lucknow. In the financial year 2012-13, toilets were constructed in 54 gram panchayats in Lucknow district under the Lohiya Gram Vikas Yojana. Shockingly, these haven’t been used by the locals even after years of construction and there being no other option in the villages.

In Kakori’s Dasdoi village, residents Baarati Lal and Chandi Prasad said that the budget that was allocated for the construction of these toilets was so little that the result was poorly constructed structures that crumbled in no time. ‘The pipe that connects the tank to the toilet is missing in the toilet that was constructed,’ says Chandi Prasad. Another resident, Kali Devi said, ‘The tank in the toilet that we got constructed gave way and broke almost immediately after we started using the toilet. As a result, the toilet hasn’t been used ever since. We continue going to the fields every morning.’

‘The only people who are still using their toilets are those who added significant amounts of money themselves over and above the budget that came from the Government,’ says another resident Reshma.

Village head of Dasdoi, Rajkumar explained, ‘The budget allocated for setting up these toilets is a mere 3 and a half thousand rupees. The sum is paltry because one can easily spend almost 15 thousand rupees to construct a basic toilet which will be usable for some time.’

The Price of Rejection