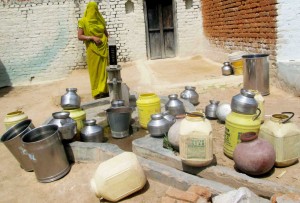 Mahoba – a name derived from Mahotsav Nagar, the city of festivals, is reeling under a severe water crisis. It is now nearly impossible to find a water body with potable water in this area which the Chandela kings had developed as their capital with several ponds and lakes.

In 2012-13, Charkhari and Jaitpur blocks of Mahoba district were included in the ‘dark zone’ – a region where ground water level cannot be replenished. Official figures state that Utar Pradesh has 165 dark zones. Unregulated exploitation of water resources, drying of ponds and wetlands and unplanned growth has resulted in a situation where people have to walk miles to fetch drinking water. Churari in Panwadi block and Akauni in Jaitpur block are among several villages in the district where excessive salt has made water from wells non potable.

The administration’s response to the water crisis has neither been prompt nor promising. Surveys have been conducted several times in Swasamaaf village of Charkhari block, but no water tank has been built there. In Atarpatha village of Jaitpur block, a tank was constructed after the survey, but the pipeline there has burst as a result of which no water can be supplied to the tank or to the households in this area.

The local administration’s response to this crisis has not changed over the years. ‘We are looking into the matter’ or ‘ we don’t have any information on this’ is the usual response. The pradhans tend to blame the water department for the crisis, whereas the jal sansthaan claims that they have handed over responsibility to the local pradhans. While the blame game has become more pronounced over time, people in the district can do nothing but hope that the administration will one day find a solution to their problem.

Samajwadi Pension Scheme – A Promise That Remains Unfulfilled in Banda