Farmers Await Unsealing of their Lands 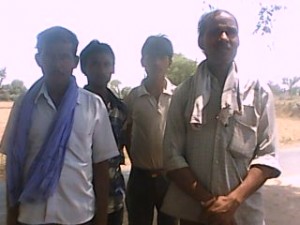 Gudhakalan village, Naraini block, Banda. Due to foul play on part of the lekhpaals (member of the village Panchayat who maintains records of land) many farmers of Gudhakalan and 52 hamlets that fall under this village, have been left helpless. For 8 years, the papers of their land have been sealed with the Police Station in Kalinjar. A court case has been going on in the Banda Court.

Dinesh Kumar, Nandkishor and Awdehesh – all farmers from here are part of this case. Dinesh Kumar said that eight years ago a consolidation of everyone’s land holdings was done here. At that time, some people colluded with corrupt officials and were able to get the land transferred to their names. When the village head Dadu Bhai got to know of this, he approached the District Magistrate and registered a complaint.

A report was lodged against the lekhpaal and kaanoongo (another revenue official supervising the lekhpaal’s work) who were involved in the case and all the land that was now disputed was sealed off. Now all these farmers can do nothing with the land which is actually theirs. They are also no longer eligible for benefits like subsidised seeds, fertilizer etc.

The village head from eight years ago, Dadu Bhai recalled that when he had lodged the complaint, the District Magistrate had constituted a five-member team to investigate the matter. This team had found that the scam covered almost 200 bighas (100 acres) of land. The current village head Rampal Garg has ensured the farmers of getting their land unsealed while he is still in office, even if he has to go to the Allahabad High Court for this.

Shortage of Women Doctors Becomes a Pain for Patients at Taarun