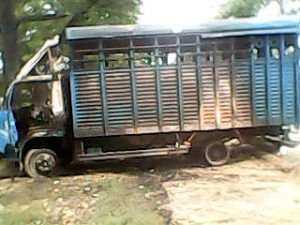 The incident occurred on 30 July when a small accident occurred between three people on a bike and a kanvadiya who was headed from Ayodhya to the Saryu river on foot. On the Baskhari Road in Akbarpur, the accident left the kanvadiya fallen on the road. Angered by the bikers, a group of kanvadiyas clashed with them and this led to violence between them. The angry kanvadiyas set the bike, 2 police vehicles and 2 buses on fire. The District Magistrate, the Subdivisional Magistrate, and the Superintendent of Police arrived at the scene to control the situation. The same night at 10 p.m. some shops were set on fire near the Shiv Baba temple. The kanvadiyas also attacked 2 journalists and broke their cameras.

Shrikant Maurya, the record keeper at the Akbarpur police station said that unknown kanvadiyas have been booked under Sections 147 (rioting), and 427 (damage to public property) of the Indian Penal Code. On the other hand, the bikers have been found to be residents of the Agbar Gramsabha of Akabarpur block. Shambhu Nishad, Karim Ahmad, Zeeshan Khan and Mohammed Isman have been booked under Section 338 (causing grievous hurt by endangering life/personal safety of others) of the IPC among other sections for rioting and causing damage to public property. No arrests have been made yet but according to the police, they are still investigating the matter.

District Hospital with No Space for Beds, Patients Treated in Veranda