Drought and Flood Both Familiar Seasonal Guests in Sitamarhi 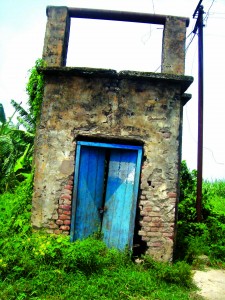 Note: Monsoon in Bihar and particularly north Bihar is a period of extremes. Delayed rainfall in districts like Sitamarhi, Sheohar, Muzaffurpur, Purnea etc. cause drought-like conditions in late July and August, yet the same region is vulnerable to heavy rainfall in September, and entire villages have to be evacuated on account of the Kosi river flooding. The issue is exacerbated by the dependence of this ‘rice bowl’ region on their paddy crop: farmers first confront huge losses when their paddy fields do not get rain when required and then flooded fields just after they have sown the new crop.

Sitamarhi district. In Ramnagar village of Sitamarhi’s Riga block, Ramlal Paswan is concerned about the delayed rains in the district. He pointed out that over the years, it has been largely due irrigation made available by boring tubewells, that farmers were able to have at least one successful harvest.

Others from the village like Kalhi Devi and Mangar Paswan also agreed with Ramlal. Farmers like them in the village have had some relief because of the tube wells. But now all of them are worried due to the delayed monsoon and the absence of any means of irrigation. In 1993, the runnel leading off the tube well broke in a flood and hasn’t been repaired ever since. Even though the village has a motor to store and release water when needed, poor supply of electricity has rendered the motor useless as well.

Mangar Paswan said that in this area of north Bihar, the last 3 years have been particularly difficult with low to moderate precipitation during the months of July and August when the monsoon is supposed to begin. This has meant huge losses for farmers who mostly grow paddy. Jasiya Devi of the same village also said that many of the farmers have been forced to source water from privately owned tube wells. This costs them almost 120 rupees per hour.

The Junior Engineer at the Department of Irrigation, Satyanarayan Kumar said that a financial estimate for the cost of repairing the tube well’s runnel had been prepared. He also said that a formal request for more regular supply of electricity has been submitted. He was, however, unable to provide any further details of who was responsible for the follow up work on both requests.

No Electricity This Month for All 57 Gram Panchayats in Mau, Chitrakoot