Man in the Mirror

“I want to live in a world where girls don’t feel unsafe walking alone”. Meet Anil, a young boy from a Lalitpur village who wants to make the world a better place. Oh, and he can dance! 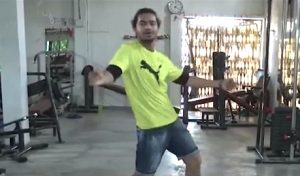 Paali village of Lalitpur district in Bundelkhand is a tiny slice of Uttar Pradesh you wouldn’t be able to pinpoint on a map. One thing’s for sure it is definitely a long way off – even more so metaphorically than geographically – from the “sitaaron ka sheher” Mumbai. But Anil Kumar Chaurasiya, 23, a Paali gaon local boy, has managed to pull down a few of the stars off the skies and nurse them preciously along with his ambitions – in the process making sure he got to Mumbai.

Although his dreams are heroic, literally – “I do want to be an actor” – Anil’s immediate thoughts and talents are more at home behind the camera. We meet him as he’s warming up, grooving to Kala Chashma, lending those Siddharth Malhotra-Katrina Kaif moves some authenticity, and understand in that minute what he means when he declares his life’s mission “to be a successful choreographer in Mumbai”, making sure the real-life stars dance to his tunes.

Anil is quite the maverick in these parts. Drawn to dancing ever since he was a child, he learnt to recognize quickly that his passion wasn’t exactly mainstream. “See, families never equate successful careers with dance. Dancing isn’t even considered to be a serious career actually. So, initially, I faced tremendous opposition from my parents.” Anil’s parents, Kirana shop owners in Paali, initially gave express instructions to him not to pursue dance.

But, amidst the dissonance, Anil didn’t give up. Instead, like all of us, he decided on the next best plan of action – taking recourse in a few white lies to get his way! “I had exams coaching in the mornings, and dance classes in the evening”, he shares, “So, what I did was I skipped the coaching, told my parents coaching had shifted to the evening, and went to dance classes only.” He sports a slightly wicked smile as he says this, and we nod along, mirroring the expression, piping in with him on the chorus, “jhooth bolkar!”

It was when he started traveling around the area for his dance that his parents began to realize the truth, and also understand him. In neighboring Bhopal, Anil aced quite a few college-level dance competitions and got to star in a few local shows as well – facts she shares proudly. And then the “hawa ka rukh” led him to Mumbai, like the stroke of destiny it was meant to be, where he enrolled himself at the Saroj Khan academy. For close to 8 years now, Anil has also been teaching dance in the big city, living out of his shanty in Goregaon (West); more confident of his skills now than he was growing up, Anil thinks he’s almost ready to make his big move.

Watching Anil dance reminds us of how dancing is just another term for freedom – the madness of it. He moves his hips, jumps, flails his arms around, in typical Bollywood style, an expression of sheer joy permanently plastered on his face. His infectious energy landed him stints in Mumbai, which in turn led to appearances on popular TV shows such as India’s Dancing Superstar and Dance India Dance, which every loyal fan knows is simply referred to as ‘D.I.D.’

Anil is keen to break a few myths while making new ones, “Dance and acting have always been considered to be professions not suited for the middle class and I want to break that notion. I don’t want anybody to think like that anymore.”

He is all for change of regressive thought patterns all around – he channels it in another avatar of his, the one that’s a martial arts expert, looking to put a stop to everyday harassment and molestation of girls and women.

“It’s become so common now, episodes of harassment”, he says, in acknowledgment of the crime stats of U.P. “We keep hearing about violence being done to women on an everyday basis; it’s increased so much, we have almost become immune to the news – this is not right.” Anil continues, “You speak to any young girl and she’ll tell you how fearful she feels walking in the evenings, even outside her home. She does not feel safe. When did this become a way of life?”

So Anil decided to put his self-taught karate to good use. “If girls can learn self-defense tactics and techniques, they will never think of themselves as weak. They will feel free and strong to move around as they please.”

Sagar and Bhopal in Madhya Pradesh, besides his own village Pali, are some of the places where Anil has taught about 150 girls these tactics. His classes are free of charge, he informs us and beams as he tells us that the girls are confident now because they feel equipped in “atma-suraksha” (self-protection).

Anil wishes to continue down this path and be responsible for dissemination of his karate knowledge to more girls. He also sees himself putting it to other uses “I want to win a gold for India”. Until then, the choreographer plans stay firmly put. One step – or dance move/karate chop – at a time!

This piece first appeared on The Wire.