Budget 2018 might be speaking of the health of the rural education system, but at a student teacher ratio of 150:1, this primary school in hinterland U.P. will need more than just a boost.

“What I do is I assign class monitors as I go along. Assign one student as the class monitor, give him or her the work and explain how it is to be done. Then I go to the next class and do the same thing there. I deal with the whole thing via this monitor system.” Meet Balwant Singh, assistant teacher at the primary school of Khiriya Bharanju village in the Mehrauni Block of Lalitpur district in Bundelkhand, Uttar Pradesh. He is speaking of a unique teaching method he has come up with, in order to deal with a peculiarly pressing situation he finds himself.

This amusing and you could say rather disagreeable method is not a result of his carelessness, and neither does it stem from unprofessionalism. The reason for it is that Mr. Singh is the only teacher for all the 150 students enrolled at the school. With a 150:1 pupil-teacher ratio, it does not come as a surprise to us – the strategy he has employed to manage the work load.
“There are 5 classes, but there are two rooms. I have divided all the classes into those two rooms myself – in one room, there are students from grades 1-3, and in the other, grades 4 and 5.”

This might seem like an optimal utilization of the resources at hand, but the impact on the students is deeply negative. As Deshpat, a Class 3 student complains, “Sir keeps switching classes, that is why we don’t study well.” His peer Bharti adds, “There is no studying. We study for five minutes and then nothing.”
This leaves the parents understandably anxious. Haribai who sends her children to this primary school is reproachful, “We send our kids there so that they learn, do something, get a job. We are illiterate and never got a chance at an education, but at least our kids shouldn’t be going through the same. They should study and move ahead in life. But if there is just one teacher, what impact will that have on the kids? They are not learning anything.”
Another mother, Rekha too has a similar lament, “There is one teacher. Now whenever he has to go to Mehrauni, he announces that as a day off. The children spend their school time roaming around.” Rekha wishes she could send her children to a private school, but she knows this is wishful thinking, “We are poor people, and dependent on the government for this.” 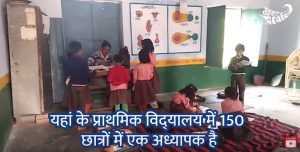 This is not a primary school problem specific to this village though, or even to Mehrauni or indeed Bundelkhand. This is a systemic institutional problem. The ratio at the primary school level in Uttar Pradesh is 39:1 according to the Unified District Information System for Education Flash Statistics. The national average is 23. Meanwhile, the Right to Education Act prescribes one teacher for every 30 students at the primary level.
Uttar Pradesh has the second highest teacher absenteeism percentage (31%) in the rural schools in the country according to a 2014 study. But teacher absenteeism is not a herculean problem, claimed another study, done by the Aziz Premji Foundation.
Also, the state expenditure on primary schools has gone up by 47% since 2011 according to another study. U.P. spent Rs 13,102 per elementary student in 2014-2015, which is higher than the all-India spending of Rs 11,252. The budget estimates of 2016-2017 of the Yogi Government show an increased allocation of funds for primary, secondary and higher education sectors. In the ‘Northern Minority Coordination’ meeting of the ministers of minority affairs of nine northern states in Lucknow, the Chief Minister called for modernization of educational institutions like Madarsas and Sanskrit Vidyalayas.
The State is already on the mission to prepare a blueprint for an educational reform, partnering with the HRD ministry – it is to this end that the U.P. government has indulged in an overhaul of the education system in a quest to turn it into an efficient and productive one. And yet, in the same district, in Kusumaad village, the primary school building is a dilapidated structure – the plaster is coming off the walls and the roof is on the verge of falling down. Hari Om Narayan, substitute teacher narrates the list of the fixes required, “The floor’s broken, the roof’s coming down, and the boundary wall is broken for about 50-60 metres.”
The block education officer, Mr. Yogendra Nath’s assurance is far from reassuring, “Instructions have been give- in respect to schools such as these,” he says, and continues, “This is not just a problem being faced by one school. There are other schools with worse conditions, in fact – the ceiling has fallen, for instance.” These complaints, we’re informed, are officially drafted up and signed by the S.M.C (School Management Committee), village headmaster and the SDMC members. They are then sent to the gram pradhan.”
Are broken buildings as intense a problem as a shameful teacher-student ratio? One can debate that endlessly, especially if one is an expert at jumla politics, but if we extrapolate the current situation, the future does not look pretty. Children studying in U.P. schools currently will be part of the working force in the coming century. 60% of this working force will come from just four states – Madhya Pradesh, Uttar Pradesh, Bihar and Rajasthan. If there is one teacher trying to educate 150 students, there is very little hope we can nurture on their productivity as they turn into adults.