Some of the news that comes out of Bundelkhand would lead you to believe that life in the hinterland was straight out of the movies, even if bereft of electricity.

Of course, we’re fast and loose with the term ‘news’ here: it may be based on reality, it may not; it may be a juicy plot substantiated by some obliging neighbours. It may be one party with a grouse being better connected to the media and obliging neighbours. Or it’s just the imperative to being true to Rule No. 1 of the Press bylaw: everybody loves a good scoop. And so, that the story about a girl and the boy she loved will be sensationalized, proliferated, memed, guffawed at, is a foregone conclusion.

Anyway, if the story about the girl who had stormed into a wedding with a gun and an SUV to abduct her boyfriend from his wedding had you all excited, allow us to puncture that enthusiasm.

On May 15, just as the heatwave was fast intensifying over the north and the arid expanse of Bundelkhand, a 25-year-old woman, Varsha Sahu, from Banda in Uttar Pradesh made headlines in national media, even in outfits that don’t really know or care where Banda is. According to local (and national) media reports, she had arrived at her lover Ashok’s wedding armed with a gun and a car (some ‘reported’ two cars), and kidnapped him. We knew that there was something very wrong with this ‘news’ story, something even worse about proliferating it, and so refused to go out and report it. Later that day, we watched the Amar Ujala ‘news’ video (subsequently pulled off the internet and social media) that was lighting up WhatsApp screens across UP, featuring much more of Kangana Ranaut aka Revolver Rani of the eponymous movie, atop horses et al, more than the actual ‘star’ of the story. The next day, we heard that Varsha had been called in to the Banda police station for questioning, and was being tormented by both media and police. Call it FOMO, call it pedantic attachment to another neglected Press bylaw (to report the facts) but we resolved to find out what had actually happened.

Varsha’s mother Santosh Kumari, whom we spoke to at length at her home in Banda said that the “whole [police] force” had come to get her daughter on the evening of May 17. When she tried to intervene, the Maudaha police took her in for questioning. It was here that Varsha was put on the dock, much like the slow and painful disrobing common in courtroom interrogations in sexual assault cases in small-town India, and subjected to questions from women and male police officers and the local and national media. “After the incident, teen din tak panchayat lagayi gayi. The media was there every day,’ says Ramhit Yadav, the father of the groom/boyfriend.

When we met Varsha, now staying at the home of a friend of Ashok’s, Rahul (another fact the media can’t get enough of), she looked like a faded petticoat wrung out to dry. Her testimony was tired and yet still steely, still angry, at the mess of social norms, misogynistic newsmaking and male cowardice that she was caught in. It was from her that we learnt of the real story: Varsha had been working in a bank in Banda town when she got to know Ashok Yadav, who was from Mohanpurwa village, and worked in a medical store, living on rent in the city. They had been in a relationship for the past three years. Ashok had been married and widowed, and had two children, who lived with his parents back in the village. He knew that his family was keen to get him remarried, and he made an excuse to leave the city. Varsha wasn’t apprised of this; in fact, she knew that he was away for work or an exam, and that his brother’s marriage was being fixed. But sniffing a rat, she made her way, in jeans and a t-shirt, to ensure she wouldn’t be recognized, to Mohanpurwa, where she heard that the wedding party (Ashok’s, although she didn’t believe this as yet) had just left the village for Mohda in Hamirpur. Varsha, on the scent of her cowardly beau, made her way to the wedding in Mohda, helped by their common friend Rahul. There, the jaymala ceremony had happened, photographs had been taken, and the bride was being blessed with gifts. But Ashok was nowhere to be found. “I asked a few kids who were running around, and they pointed me to a car, where I saw him, all dressed up. I tapped on the window and said, I thought you said your brother was getting married?” Commotion started to brew, and crowds shifted their attention from the bride to ‘the woman scorned’. Ashok tried his best to calm the crowds, but things were getting out of hand and just as Varsha was about to be assaulted, he pulled her into the car and they left the scene of ‘the crime’. “On the way, in the car, I told him that he had betrayed me, and I didn’t want to speak to him again. He dropped me home, and he left, for I don’t know where,” she tells us now, pokerfaced.

The couple had barely left the wedding when the story took on a life of its own. ‘What can I tell you, we weren’t even there when everything happened, we reached 15-20 minutes after. The girls’ family told us the whole story, that [Varsha] had arrived with a gun, and two cars…we filed our report on the basis of what we’d heard from them.” And so, Varsha soon had a case slapped on her for abduction, courtesy Ashok’s parents, who were shocked and furious at the turn of events. Varsha was soon taken into police custody and in the presence of the media and police, made to sign a false statement that said that indeed, she had stormed Ashok’s wedding, with a gun and an SUV. 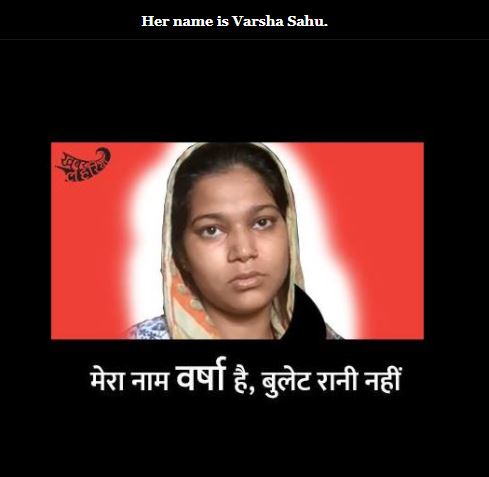 Days later, when Ashok made a sheepish reappearance, and sat alongside Varsha to give his statement at the police station, he admitted to having known Varsha and that he had left his wedding of his own accord, in his own car. He was too afraid to admit to having married Varsha before, which she had claimed, despite her attempts to persuade him to ‘atleast now tell the truth”. But, stuck between the wrath of his girlfriend and his family, Ashok was paralysed. Little did he know that things were to take a turn for the worse: before he could leave the police station, another aggrieved family, that of his would-be bride, slapped a case of dowry harassment on him, and Ashok was taken into police custody.

Meanwhile, Varsha is out of house and home, awaiting Ashok’s release so that they can be married. “His family won’t support us, neither will mine, how long will we stay with other people? But I’ll marry Ashok, or else I’ll die,” she says. She admits to being in regular touch with Ashok over the phone as he awaits release, and that he promises to marry her when he’s out. “It’s not a major case, he just needs to get someone to bail him out, and he’ll get married to [Varsha],” the Station Officer at the Maudaha police station is untouched by the Bollywood style drama unfolding in his precinct. For Ashok’s family, the end to this wild west fairy tale isn’t as happy. The abandoned bride’s family is dead set on getting compensated for the wedding-that-wasn’t, both in terms of money, as well as a groom. Ashok is still first choice (it boggles the mind), but if he’s unavailable, his younger brother will do, we learn. With a dowry case hanging over his head, Ramhit Yadav isn’t feeling too sympathetic about his son’s romance, “If he had just told me he was in love with someone, why would I have gone through this fuss, all this money?”

As the lovers languish in a no man’s land of slander and debilitating social norms, the (anti)hero of the story is no doubt, the media. Having branded this young couple who dared to love for the worse, they’re buzzing like flies around Varsha now. Their advice? To enter politics, because then her case will be resolved ASAP.