An Interview With My Father, A First Time Panchayat Candidate 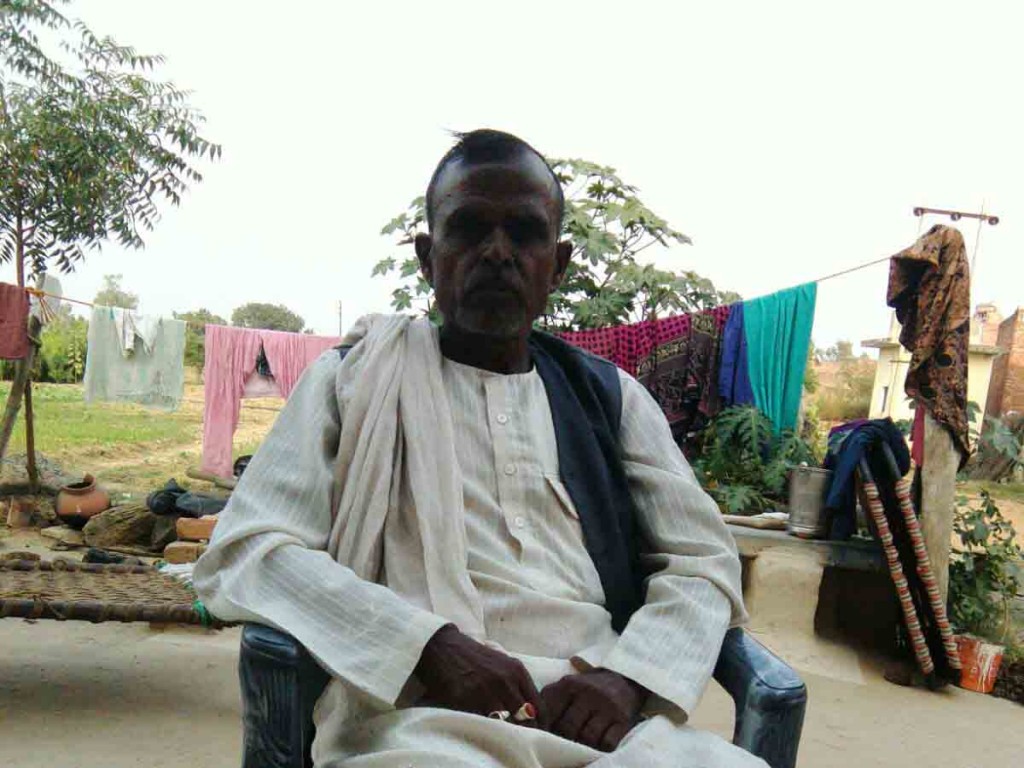 This year, my father contested the Gram Panchayat elections from Kashai Gram Panachyat in Karwi Block of Chitrakoot district. He contested the elections against 30 candidates.

I have reported on every aspect of the elections for Khabar Lahariya over the past 13 years; this year, a suggestion was made that I interview my father. There is very little writing by Dalits on issues concerning the Dalit community. And the number of Dalit candidates contesting elections is also miniscule. This was a rare opportunity where a Dalit candidate standing for the pradhan seat was being interviewed by a Dalit reporter, who happened to be his daughter – An interview where I had a deep understanding of the context with respect to the interviewee due to being a part of the community and the family and also an understanding of the political context due to being a reporter. I had never even dreamt of meeting my father and talking to him in a setting like this. I have dealt with the interweaving of my personal and professional life but this was a line I was not prepared to cross.

‘You are a fearless and independent reporter, aren’t you? Why are you inhibited about interviewing your own father? Interview him just like the array of political candidates and ministers you have interviewed before. Do not look at him as your father but as a promising first time political candidate. Be it a family member or otherwise, you should interview them all.’ With all these thoughts cluttered in my head, I accepted the offer and went on ahead to interview my father. Another cause of my tension was that at first I had opposed the idea of my mother contesting because she is uneducated and I wasn’t too happy with my father contesting either. All because I understand how difficult it gets for decent folks when they step into the murky world of politics. Despite of my father’s request I refused to accompany him to the enrollment procedure. By the end of it all everyone in the family got involved in the campaigning and supported him with all that we had to offer financially. Immediately post the nomination, I headed over to my village to interview him.

My 64 year old father is uneducated but is a very intelligent and an understanding man. He has been a farmer since he was young. He has two sons and four daughters who he always loved and cared for more. I am the oldest daughter – I quit school, got married at an early age and after much hard work and perseverance am now an established journalist. One of my sisters is a teacher in Chitrakoot and the others are currently studying. The four of us sisters provided monetary support to our father through his campaigning process.

My father lives at his in-law’s house, which is my mother’s house. This is why people often call him “mehmaan” (guest). Most people do not know his real name. My father is from a village called Baghwara which is why a lot of people also call him ‘Baghwaharaha.’ My father’s real name is Madho Prasad Varma.

Q: Where did the idea of contesting the elections come from?
A: I have wanted to work towards bringing progress to our village. These days a lot of the youngsters in our village are unemployed and are wasting away. They are not interested in doing any MGNREGA work. I want to do something for them. A lot of public spaces like the Panchayat Bhavan, wedding halls and the gram sabha land are lying vacant and unused which I want to convert to productive spaces. If small scale factories or mills are opened up here, the youngsters here can be employed. And I’ll also work on other issues with respect to open drains, roads, and civic progress.

Q: Why did you choose to contest the elections and not encourage your educated sons to?
A: This isn’t a question of educated or uneducated. This is about the being familiar with the context and the issues. My sons don’t have any experience in the field of politics.

Q: How has your experience in politics been so far?
A: I was a part of the Communist Party of India from 1962-1980 and have fought various kinds of fights alongside them. I have travelled and lived across Banda, Lucknow, Allahabad and Delhi. Many a times we have made our share of visits to jails. After working with that party I had come to a full realization that upper caste folks will never let us Dalits get ahead in any field. We started to feel very repressed which led me to joining the Bahujan Samaj Party and working with them in 1992-93.

Q: What stand out experiences did you have during your stint with the BSP?
A: When I felt repressed and direction-less while working with these parties, I joined the BSP for some clarity. I felt that the words of Dr Baba Saheb “padho likho sangharsh karo, sangathit raho aur aage badho” (read, write and strive, stay together and move forward) were being followed here and I felt encouraged and tied together with them. A lot of positive change came about. BSP showed me a way which led me to educate my children and push them to accomplish great things. If I win the elections and become pradhan, I will bring about so much progress and make my block, district and country proud.

Q: We have heard that BSP is going through some changes and many smaller Dalit parties are being formed?

A: BSP has a history and a legacy which no one can change. They have showed me the way. Nonetheless, only money speaks in politics now. “Behenji” is coming in the way. Ambedkar always shows me the way ahead and says that even if we personally can’t go ahead, we shouldn’t pull others back.

Q: What other kinds of development work has not been accomplished in your village?
A: There has been a fair bit of development in my village but it has all been concentrated in the upper caste regions. The dalit bastis are still the same – no roads, no drains, dirty water all clogged up, no homes for the poor who have been deprived of residential colonies, many pensioners who have not received their pension yet, MGNREGA loopholes, the poor who have no ration cards etc. If a reliable and incorruptible pradhan is chosen, all these problems can be solved.

The counting has closed and the results are out. My father sadly has lost by 50-100 votes. A day before the elctions we heard that people would vote for him, we also heard that a lot of votes have been bought out. Another candidate called Ramsajeevan Varma has been declared the pradhan. In the future if my father doesn’t contest himself, he plans on pushing an honest candidate who will tirelessly work toward the progress of his constituency.

I am saddened by the news of my father’s loss because of family ties. But as a journalist and a member of the society, I am saddened because he was a promising candidate with a fresh perspective which I didn’t come across through various interviews with other candidates across UP. While repeatedly listening to the clichéd mindless promises of development with respect to drains and roads, I think my father had a good understanding of the problems especially concerning the youth. Despite of being an uneducated farmer, he understood the importance of education and encouraged us children to study hard and strive to be better citizens. If he were elected, he would have wisely encouraged the daughters of the village to study further with his personal experience.

In Banda- Men may not work but women’s...