One-Tree School, Or What a Difference the Weather Makes 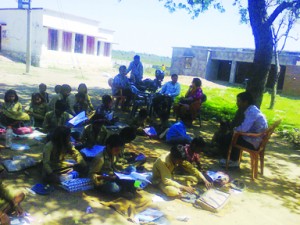 Chitrakoot. On a bright sunny day in March, just as the sun is beginning to be a little more assertive in the north Indian plains, Sumit, Kalpana and Mansita reach school and take their seats under a tree. Another 30 students are already sitting there with a teacher seated on a chair. In the background, you can see an empty school building, with one freshly collapsed wall. This is what a regular day looks like in the Primary School in a forested hamlet of Dodhamaafi village, a school that has been in-the-making for 12 years.

The closest school to this hamlet was 3 kilometres away, leading to many children not being able to access even primary schooling in this remote and forested village. Subsequently, a budget was sanctioned to build both primary and junior schools in the hamlet. The junior school was completed, but the primary school building still cannot house classes inside. ‘In 2003, a budget of 6,02,000 rupees was sanctioned for the primary school in this hamlet, but the construction of the building did not begin. In 2012, I was given the task of getting this school made. But the current costs of construction are close to 14 lakhs for a primary school – what am I supposed to do with this meagre budget?” says Shailendra Patel, earlier a teacher in the school in Dodhamaafi who was given the task of getting the building made. In only the last 3 years, Shailendra avers that the construction has been interrupted four times – twice because of the elements attacking the obviously poor quality materials, and twice because of dacoits at large in the region. ‘If we do not pay them 25 percent of each installment that we get, they don’t let the work progress. We ignored their demand back in 2012 and they demolished half of whatever we had constructed,’ he says.

In November 2014, the District Education Officer had suspended Shailendra Patel since the building had not been completed. ‘I was given an ultimatum to complete the construction by the end of March 2015.’ Even if this does happen, the children may be better off outside, than in a building that could crumble any moment.

‘Work began on the school building in 2012. But it’s been 3 years and whatever work has been done, the building is still unusable. So we just started taking classes under the tree,’ says Asim Raza, a teacher in the school. ‘In the summer it becomes very difficult with the sun in our eyes and hot winds in the afternoons,’ says Mansita, a student of Class 5. ‘We get a holiday on rainy days,’ quips Sumit, a student of Class 2.

‘This is the closest school so we don’t have an option. On rainy days, there isn’t even place for the students to sit,’ explained Asha, who’s daughter studies in the school.

When contacted, Virendra Kumar, the District Education Officer in Chitrakoot was busy with the closing of the financial year, and could not be persuaded to give an interview. He said it was difficult to keep track of all such schools in the district.

Registering for Ration: The Race for Ration Cards has a Hefty Entry Fee