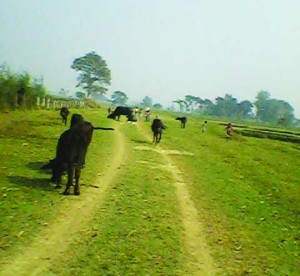 Sonbarsa block, Sitamarhi District. As per a Supreme Court order, the Armed Border Force prevented the movement of cattle across the Indo-Nepal border in north Bihar’s Sitamarhi district, during the last week of November. This is to keep a check on animal trafficking as part of the Gadhimai festival to be held on the 28th and 29th of November in Barah district of Nepal. This was the first time that such measures were taken to regulate the sale of animals for sacrifice at this 5-yearly fair.

Vijay Kumar Singh of the Armed Border Force who is posted in Sonbarsa said, ‘This year both India and Nepal are trying to bring down the number of animals sacrificed at this fair. Each day almost 40 animals are traded illegally at the border. A close watch is being kept to prevent such transactions.’

This move is a part of a series of activities all month to limit the number of animals sacrificed during this traditional fair. The Supreme Court of India had earlier passed an order restricting the movement of animals at the border in late September. The Ministry of Home Affairs along with the government of Nepal has been trying to promote fewer animal offerings during the 2-day festival. Most of these animals are sold illegally at the border from India to Nepal.