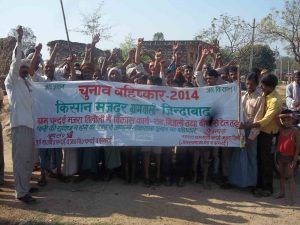 Chandai village, Mau Block, Chitrakoot district. On the 30th of April 2014, only 1 person came to booth no. 107 here. The village has a population of 4000, and approximately 1500 on the electoral list. Only one of five handpumps work here, and there is no paved road. Electrical towers exist, but electricity is yet to reach. People say that they will not vote in any election until their village does not have water, electricity and roads.

People of this village decided to abstain from voting 3 months ago. A protest was also staged around this issue. On the day of polling, only one man, Kuber Mani Mishra, voted. The pradhan Chandkali’s husband Rakesh said that the villagers are angry.

Official attempts to appease voters: Some are convinced, but most decide to abstain

Banda district. Here, voters angry at the apathy about their issues of water, electricity, health services and the lack of compensation after their crops were ruined, refused to vote. Banners shouted, ‘If political parties aren’t with us, why must we support them? Do not pressure us to vote.’ People from various hamlets of Mataundh village in Badokhar Khurd block boycotted the voting. The lack of compensation for crops ruined by unseasonal rain was a major issue for voters here.

Avdhesh Gyan Singh and Rakesh, of Khahra village said, ‘In the Assembly elections we were promised tarred roads, drinking water and facilities for irrigation, and electricity. But nothing happened. The health centre is 15 kms away from Mataundh, and if there is a need to go at night, there is no transport available. And on the other hand we’re never given compensation for the crops ruined by the weather.’

The pradhan Ramprakash said, ‘When the villagers took the decision to not vote, the Additional Sub Divisional Magistrate came and tried to reason with people. Leaving aside a few, most people remained fixed on their opinions. People said that their crops have been destroyed by hail and frost in the winter, and fires in the summer. But they haven’t been provided any compensation.’