Amidst gau raksha noise, cows are dying of neglect. A report from a cow shelter in Chitrakoot where recent cow deaths are causing local panic

When does an all-too-familiar recurring problem become a burning issue?

In Bundelkhand, one of the most under-developed regions in India, characterized by arid land, prone to droughts and famines that start off every year this time, the problem of stray cattle has been an ancient one. Locally termed ‘anna janwar’, there is a ritual around it too – the anna janwar pratha, which basically involves letting go of cattle past their prime. Indeed, it is such a Bundeli problem that local government representatives speak of it in semi-nostalgic tones – think 70-something MLAs wistfully recalling his childhood marked by long summer days spent practicing the anna pratha.

But it was not until 2017 and the BJP sweep of Uttar Pradesh followed by the instating of a religious head at the helm of affairs, did the problem become a mudda.

U.P. Chief Minister Yogi Adityanath, in a bid to protect gau mata – central to the hardline Hindutva-espousing values he has propagated in his capacities as mahant of the Gorakhpur math, and the founder of the Hindu Yuva Vahini – has put into effect a two-fold approach to ensure this on the ground.

Large budgets have been directed towards the “rakh-rakhav” (well-being) of cows, while law and order guidelines have been set into place for the protection of the holy cow. The former has meant budgets’ sanctions while the latter has been a series of announcements, both formal and informal, clarifying the official stand on what HYV members like to call gau raksha. ‘Anybody found killing or causing harm to cows will be put behind bars,’ Adityanath had declared in November 2017. And in the new fiscal year, he set aside 647 crores on cow welfare. Add to this the Gau Kalyan cess levied on public sector institutions to build and subsidize local cow shelters and impossible-to-abide-by deadlines – ‘All stray cattle in the state will be housed by January 10 2019’ was one such.

In Bundelkhand alone, the budget for cow shelters was 90 lakhs. Given that the 2016 animal census estimates the number of cattle in Bundelkhand at 2.3 million – close to 88% of that number being stray – the Math was not a heartening one.

It is one that we see illuminated in the district of Chitrakoot, in Bundelkhand’s U.P., where in the cow shelter located in Chureh Kesruwa village, more than 100 cows have died in the last few months. “What do you mean, how”, asks Kuli, the caretaker at the shelter, of KL reporter Sahodra, “They were starving.” According to Kuli, the cow shelter has had no access to fodder to feed the cows – they house close to 300. “Until about 40 days ago, sarson ka bhoosa was coming for them to eat. But in the last month, there has been none.” Coupled with the scarcity of water, already a problem at the onset of Bundelkhand’s summers, the deaths have long been coming. “We’ll also die if we don’t eat or drink for days, right?”, is how local Ramkali puts it. 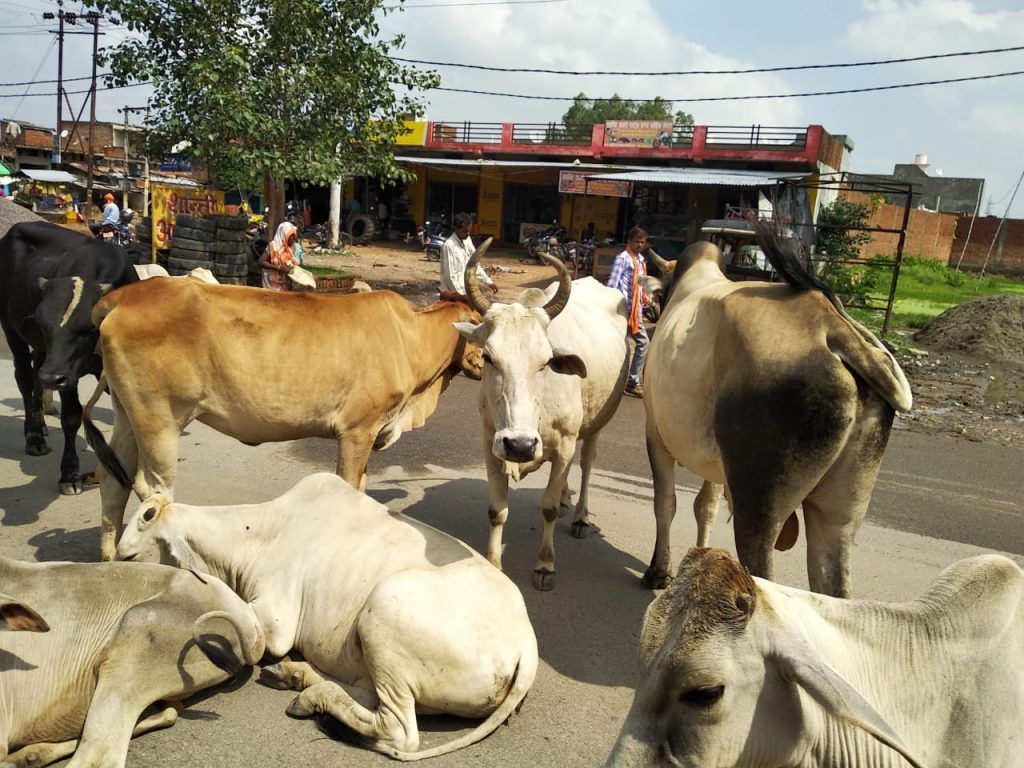 The death of the cows was a sensationalist piece of news that travelled far and wide amidst local networks. Sahodra found out why when she went to investigate. “10 have died within a matter of 72 hours”, she reports, “That is when the official post-mortem inquiry was ordered and conducted”.

The cow shelter was built as a result of local drive, we’re told, the local gram sabha, the pradhan and the sachiv were instrumental. But the budgets have been wanting. “That’s why there are no boundary walls”, Kuli informs us, “just this one lame gate, baans ka phatak”.

Chureh Kesruwa is only one such example. In Chitrakoot, we have found both facilities and budgets wanting across the 70 government-registered cow shelters. When farmers raged through the wintry nights, keeping vigil over their fields and protecting precious rabi crop, they spoke of the same mudda, of there not being enough shelters to house the stray cattle.

Official reactions have been apathetic, at best. RK Patel, a popular party-hopping politician in Chitrakoot, currently the BJP MLA from Mau-Manikpur constituency and in the running for a ticket again this Lok Sabha elections, puts the onus back on the famers, “Farmers have to become more aware”, is how he had put it at a press conference in 2018, adding almost poetically, “The problem is farmers, and the solution too is farmers.”

While the official vet Dr. Ramesh Kumar ascribes the deaths to “illness and the sudden rise in temperatures”, Sangam Lal Gupta, assistant District Magistrate, Manikpur, Chitrakoot, reacts casually, “We dispatched a team as soon as we heard of about seven or eight cows suddenly dying. Initial enquiries have revealed that they hadn’t been fed for days. But we are waiting for the official postmortem report.”

Meanwhile, in Chureh Kesruwa, locals, perhaps inspired by the reigning government, are trying their own hand at word-play. Says Ram Pyari, “Chowkidar chara nahi denge toh chowkidaari karke kya hoga? (If the country’s watchmen don’t provide fodder, then what’s the point of being a chowkidar?).”