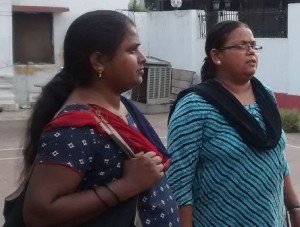 Kavita, founding editor of Khabar Lahariya, wrote this week about her, and her colleagues’ experience of being phone stalked for months, and the apathy of the local police when this matter was registered. The piece was published by The Ladies Finger last week, and generated huge response on social media. The UP government, administration, police were jolted into a rare speed and action, and the accused is now in judicial custody. Kavita talks to The Ladies Finger about putting this story out, what it meant to her and KL, and what she hopes it means for women journalists working in similarly insecure circumstances.

Listen to the interview with Kavita here.

Below is the transcript of the interview:

LF: You are in Lucknow this afternoon?

K: Yes, for the press conference.

LF: Can we talk about what’s been happening with you and your colleagues for the last 6-8 months?

K: We started getting calls on 7th January. He’d call and keep pestering us to talk to him. He ended up bothering many people at Khabar Lahariya. Day and night, with indecent calls and messages. We requested him not to bother us, threatened to complain to the police. He ruined our meals, our sleep, our living, our work. We called 1090 and made a complaint on January 10, two-three times from our various numbers. Then we went to meet the DIG in Banda. Complained to him. Then, on January 20, the FIR was written in Mau Police Station. After that, no one followed up with us. We went back there many times but nothing happened. Meanwhile he kept on calling until we were extremely disturbed, and he and the police kept in touch too. He would call the police often. The DIG spoke to him right in front of me, he challenged the DIG to do his worst. He threatened violence, threatened to kill us. Then one of our writers decided to write about it for The Ladies Finger. When people read that article, there was pressure on the authorities to do something. We started getting calls from the police, from the SP, DGP, station officer, etc, asking, “Where are you? We want to talk to you.” The police became energetic and made an arrest within two days [on September 16].

LF: Have you seen the man they arrested?

K: Yes, yesterday [September 16] 3-4 of us went to the police station. They brought the arrested man before us and asked if we’d ever seen him, and we said we’d never seen him, he only talked to us on the phone. We just know his voice. They made him talk to us, and we recognized his voice.

LF: What did he say to you? Did he apologize?

LF: Oh, so he dared to talk to you like that in the police station?

K: Yes, and we asked the police to imagine how he would talk to us in private then.

LF: How did the SP and other police talk to you?

K: When we went to the police station, they were good to us. We told them they should have warned us before bringing the accused into the room with us, they apologized to us for that and said they’d been pulled up by their superiors for their handling of the case. We spoke to the SP for a long time. We thanked him for finding the culprit within two days, and suggested that the kind of energy and enthusiasm the police had shown in our case could be employed in other, similar cases too, involving women who don’t have as many resources as we did.

LF: Did he explain how they’d caught the accused so quickly and suddenly within two days?

K: We asked him what had happened, told him we wanted to know how they caught him. He replied that he hadn’t heard of this case before at all; if he had, he would have taken action by now. So we asked again why the case had suddenly got his attention. He said that some authorities in Lucknow spoke to him about the case and he pulled the case file. Then it was just a matter of police work. We checked his Aadhar ID proof and found him.

LF: Did they find out how he managed to call you from so many different numbers?

K: They have confiscated 40 fake SIMs from him.

LF: As you’d written for The Ladies Finger, he had harassed you for months until you were…

K: …we were broken. We left no stone unturned in our attempt to get the police moving on the case. We’d called 1090, complained in the Mau police station, met the Chitrakoot SP in that police station, we went to the Mahoba police station, the crime branch, registered an FIR, but nothing happened. We asked them why they wouldn’t just trace where the phone calls were coming from, but nothing.

LF: Since this went on for 8-9 months, and during this time you all were doing your Khabar Lahariya work besides, what sort of effect did this have on all of your work, or what kind of an effect do you think it will have on your work in the future?

K: We don’t know how, but Nishu always knew when we had a lot of work. He would phone exactly at that time, like on production day, before the paper had to go to press. He’d call us all at those times, and threaten us. We could not switch off our phones, our numbers had been distributed to all our correspondents in the field, and we would get calls from Khabar Lahariya journalists in Delhi too. Because of this, we weren’t able to properly talk to any of these people. There were so many of his calls, that even if we didn’t answer a call from one of his numbers, we’d get a call from 10 other numbers of his. Even in the night, we could not avoid his calls if we were working. We’d always be afraid that he would just turn up where we were. We’d want to send a press file, coordinate with someone, debrief someone, but we couldn’t even get that done because his calls would keep coming, he left no gaps for others to call us. Some of us couldn’t even talk to our kids, our family. We were getting so tense that we’d suddenly wake up at night thinking the phone was ringing. He’d wake us up at 4–5am, at 12–1am.

LF: Will this experience affect the way you write and report violence against women?

K: When we spoke to the DGP and others, we pointed out that they would never have made the arrest if our story hadn’t been published. I think this case would have remained cold if it hadn’t come out in the media. But what about other women, who don’t have that many resources? When we went to the crime branch to complain about our case, they said, “Your case isn’t special, it seems pretty normal, and we can’t do anything about it.” We stressed that Nishu was abusive on the phone and asked that action be taken, they asked for specific details, asked for Nishu’s exact words. We were already traumatized by our experiences, and when we go to a police station to complain, and they end up asking us weird questions, it just makes the trauma worse. So we told them that if they pursued the case and made an arrest, then we’d repeat his abusive words in court once and for all. We’ve realized now that the police are capable of taking action quickly, and we know that this is possible with every single case of harassment, but they all remain pending.

K: Because it’s true, the police never take quick action. This eight-month lapse, during which the police did nothing, made Nishu even more arrogant.

LF: Will this case change your reporting work in the field?

K: When we started work here it was a big challenge for us as women journalists. It’s a male dominated field here, with highly educated people. We get asked irrelevant, patronizing questions like, “How many children do you have?” Our experience of gender-based discrimination poses a big challenge.

LF: After this experience, does your work feel even more important to you?

K: This case is bigger than us, bigger than the problems we’ve faced as women journalists. It reflects on bigger social problems for women – rural women, college students, everyone. Those make our work important, it’s always been important to us and we’ll keep doing it.

LF: Are you going to press charges, and take this case to court?

K: Right now he’s in jail and people are talking about a 10-year sentence. This seems appropriate to us. And if we need to, we will take this to court. Thanks to you and the rest of the media for publicising our case, and we hope this happens with every case of harassment.

Jal Jeevan Mission in UP : Few Taps In Banda, Taps But Not Enough Water in Baghpat