﻿ Voices from the relief camps of Muzaffarnagar

“It must have been twelve-twelve-thirty in the afternoon. I was cooking, when suddenly some people jumped down from the terrace into the house. They started breaking things. Some of the men started looting my house. I started running to save my life but they dragged me back by my hair.”

As she left for her medical examination in Muzaffarnagar, the woman told us that there had been five men. The names have been given to the police, but all of them are roaming free. On the basis of the medical report in this case, an FIR has been filed with the charge of gang rape in the Phugana police station, Tehsil Budhana, District Muzaffarnagar. Sitting close by, the survivor’s husband told us that when this incident happened, he and their four children were just outside the house. When his wife tried to escape, the men plunged a knife into her shoulder. When her husband found her, she was unconscious.

For the past one month, this woman’s family has been living in a relief camp in Muzaffarnagar’s Loi village. They say that they do not want to return to the village; the survivor says she will not go back until the culprits are caught. They have filed the FIR against five men – Ramesh, Bijendra, Devendra, Ramkumar and Sunil. These are powerful men, and are close to the Pradhan. The police have not been able to do anything to them yet. The five men have been charged under section 395 (robbery), 397 (looting and attempt to murder), 428 (for killing someone’s animal) and 376 (rape) under the Indian Penal Code.

Her husband said that the police have the same answer every time – we are looking for them. But everyone knows that the men are roaming scot free in the village. He also said that during the riots we called the police on 100 incessantly but the line was either busy or the call would not go through. The violence began around 11 am, and the police arrived at the scene after 5 pm. Many people had been killed by then.

So far six FIRs have been filed in Muzaffarnagar under rape and sexual violence. No one has been arrested yet. 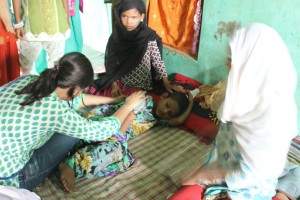 She has been living in the Tavli camp (Muzaffarnagar district) since violence broke out in the village on 8 September. She is mostly taking care of 3 of her 5 grandchildren who are also staying at the camp with their mother Fulhujra. The other children have gone to stay with a relative in Muzaffarnagar town.

Latifan says that they simply ran when news of communal violence spread – “Jo jahaan jaise tha, bas uthkar bhaag gaye. Jiske yahaan choolhe par roti thi wo aise ke aise hi chhodkar aagaye.”  (Whatever people were doing, wherever they were, they left and ran. Those who had rotis cooking on their stoves, just left them there). She went on to say that people just left however they could – some on bikes and some on foot. Most people just ran into the dense sugarcane fields since there was nowhere else to hide.

One rectangular room of the Primary School where this camp is run, has been allotted to women and children. Here, Latifan’s 8-year old granddaughter lies, unwell. Fulhujra is busy tending to her other children while Latifan fans her granddaughter to ease her discomfort.

Fulhujra’s husband is living in another camp some distance away from this one. The family is able to meet once every few days as he is trying to find some odd jobs to be able to make some money. Fulhujra says that a doctor visits the camp every morning for roughly an hour. Her daughter was given some medicines for a fever and cold 2 days ago but there has been little improvement. They have no idea what might be the problem. As Fulhujra talks to us, her daughter begins crying. She is still running a temperature and is in continuous discomfort.*

Latifan said that to a large extent their village’s Pradhan was complicit in the rioting that happened. She also said angrily that no one from the local administration had visited them or spoken to them to say that everything was going to be alright.

*[The doctor travelling with this team said that a persistent fever is sometimes a result of extreme stress and trauma. A continuous check needs to be maintained on the child’s health.] 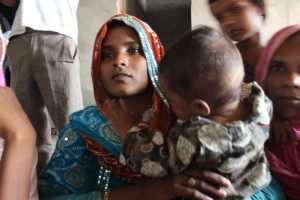 Kauser is living at Shahpur camp (Muzaffarnagar) with many members of her family. Her 16-year old sister-in-law Goshima has become the centre of attention at the camp as she observes Iddat (a 40-day period of mourning for her husband). Goshima’s husband, 18-year old Irshad, was killed in the riots. They had been married less than a month.

Kauser said that their house in the village was burnt down and she knows that at least 8 people in Kutbi alone have been killed. She also lost her father-in-law. It was the military that brought them to the camp. Kauser said that the mosque was also attacked and damaged. Her brother-in-law Imraan (Irshad’s brother) said that they had filed an FIR against Bhim, Neetu, Kada, Lav Kumar and Bablu (mostly members of the Pradhan’s family). Kauser holds the Pradhan responsible for being complicit in most of the destruction. She said that when the police came to the village initially, the Pradhan sent them back telling them that the sound of gunshots were from a marriage celebration. Kauser has been living in the camp with her 2 children while her husband is out looking for work. She was most concerned about how they would have a home again.